Interstate 676 is a 6.90 mile long urban loop of I-76 through Downtown Philadelphia, Pennsylvania and Camden, New Jersey. The freeway takes the Vine Street Expressway between I-76 (Schuylkill Expressway) and the Benjamin Franklin Bridge. An at-grade connection joins the bridge and freeway, including traffic lights along westbound at Franklin and 8th Streets and eastbound at 6th Street by Franklin Square in Philadelphia.

Interstate 676 overlaps with U.S. 30 from I-76 east to a wye interchange with Admiral Wilson Boulevard in Camden. A toll plaza east of the Ben Franklin Bridge collects fares for the westbound direction. I-676 turns south from there, remaining within the city of Camden to the east end of the Walt Whitman Bridge. Interstate 676 travels 4.75 miles in the Garden State.

Originally designated Interstate 80S, and later as the I-76 mainline, the first portion of I-676 completed was the section leading north from the Walt Whitman Bridge approach to Morgan Boulevard (Exit 3) in 1957. The urban freeway opened from the Ben Franklin Bridge (U.S. 30) to Exit 5 (County Route 531) in 1972 and was completed in New Jersey, between Exit 3 and Exit 5, in 1980.1

A two-wye interchange joins the Vine Street Expressway east end with Interstate 95 (Delaware Expressway) just north of the Ben Franklin Bridge. There is no direct access to I-676 east to New Jersey from Interstate 95.

The I-676 loop through Central Philadelphia and Camden, New Jersey was designated as Interstate 80S in 1958 while the the Schuylkill Expressway through South Philadelphia and the Walt Whitman Bridge were a part of Interstate 680. I-80S and I-680 were renumbered as I-76 and I-676 respectively in 1964. Interstate 676 was the main route of I-76 until 1973, when the designations were swapped.1 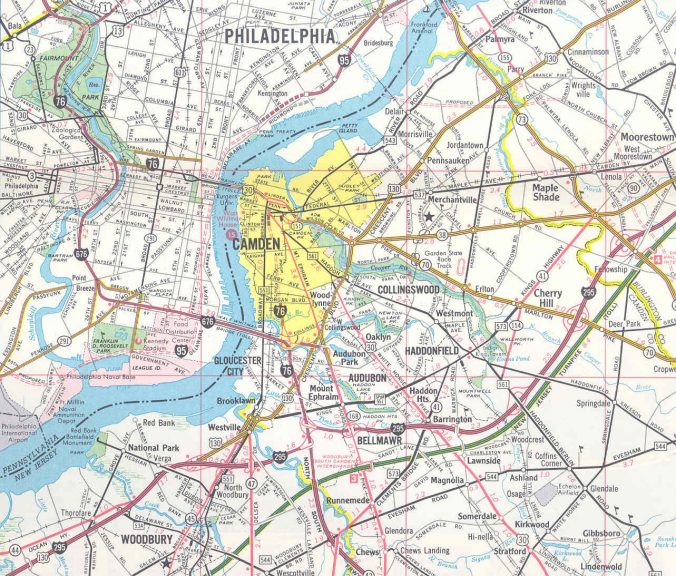 Originally known as the Delaware River Bridge, the Benjamin Franklin Bridge opened to traffic at midnight July 1, 1926. Four days later on July 5, President Calvin Coolidge officially dedicated the world's longest suspension bridge, a distinction the span would hold for three years until the opening of the Ambassador Bridge between Detroit, Michigan and Windsor, Ontario.2

Origins of the bridge date back to the 1800s when a narrow mile-long island on the Delaware River was removed to allow for uninterrupted ferry crossings and an eventual bridge between the cities of Camden and Philadelphia. In 1919, the Delaware River Bridge Joint Commission was created by the respective state legislatures to share the costs of the future crossing. It was thought that the suspension bridge would cost $29 million to build. However actual construction totaled $37,103,765.42.2

Concessions were made to the area neighborhoods that were in the path of the new span. The St. Georges Church on Fourth Street was one of the structures spared demolition. Angry protesters demanded the 1769-built church be spared and eventually persuaded the Bridge Commission to move the bridge slightly southward by 14 feet. By September 29, 1921 all land was approved by the Army Corps of Engineers and the Secretary of War for bridge construction. Work commenced on January 6, 1922.2

The suspension bridge is supported by two concrete piers resting in bedrock on each side of the Delaware River. The uppermost third of the supports are built with granite blocks. On the Philadelphia side of the river the pier extends 80 feet from the bedrock below. The Camden side support is 113 feet in height due to the deeper nature of the river there. Flexible silicon steel comprises the material used for each of the 350 foot towers of the Ben Franklin Bridge. 3550 foot long cables stretch across the river to support the bridge deck itself. Six toll houses including ten booths were constructed on the east side of the span. From start to finish, including the toll barrier, the bridge is 9,620 feet in length.2

On January 17, 1956 the bridge was rededicated the Benjamin Franklin Bridge.2 A lighting system along the bridge highlights not only the bridge deck but the towers, cables, and pier supports. The lights are changeable and sometimes feature a red-white-blue motif based upon time of year. Additionally the suspension bridge carries two bicycle/pedestrian walkways and two PATCO light rail lines. The 128 foot wide bridge deck carries seven overall lanes with a movable barrier between the directions of travel.