Founded in 1846 and incorporated in 1862, Eugene, Oregon’s second largest city, is named after its founder, Eugene Franklin Skinner. The city of Eugene lies along the Willamette River in Lane County and is the home of the University of Oregon. The city and its companion Springfield comprise a large metropolitan area serving 369,519 residents according to the 2016 U.S. Census estimates. Springfield was platted in 1856 and incorporated as a city February 25, 1885.

Interstate 5 provides the main north-south route through Eugene. Built in 1961, the freeway enters the metropolitan area from Goshen alongside the Willamette River with Oregon 99. Oregon 99 splits from the route onto Franklin Boulevard toward the University of Oregon campus and downtown. Interstate 5 meanwhile turns north to cross the Willamette River roughly parallel to the Eugene and Springfield city line.

Improvements to Interstate 5 include two potential interchange projects through the Eugene area. First proposed is the expansion of the wye interchange between the freeway and Oregon 99 & 126 Business (Franklin Boulevard) at Exit 191. Proponents of the ODOT idea include those hoping to see a revitalization of the downtown Eugene economy by providing additional access to it via Franklin Boulevard. Opponents cite an increase in congestion and noise levels through the neighborhood areas between Interstate 5 and the central business district. Ramps may also adversely effect the Laurel Hill Valley by condemning several homes. However with all of that stated, the interchange may mitigate traffic issues by tieing into a planned new Willamette River Bridge for Interstate 5. At present a portion of the original span over the river sits abandoned. New ramps could tie directly into the new span, providing the necessary capacity via Interstate 5 to the growing Gateway Mall areas in the north metropolitan area. This idea is a supported alternative to the construction of a new Ferry Street bridge to the west.4

The second interchange project along Interstate 5 involves the upgrading of the full-cloverleaf interchange between Interstate 5 and Belt Line Highway (Exit 195) along the Eugene / Springfield city line. Continued growth of the areas in and around the Gateway Mall put pressure on the existing freeway network and Exit 195 interchange. The $113 million Interstate 5 Beltline Interchange project entails the construction of a northbound to westbound flyover and a new southbound to westbound ramp, the addition of auxiliary lanes to Belt Line Highway between Interstate 5 and Coburg Road, construction of a bike/pedestrian bridge, the purchase of additional rights of way; relocation of utilities and sound wall construction along the westbound side of Interstate 5. Funding for the project is included in TEA-21, High Priority Corridor 30: I-5 Trade Corridor.5

Constructed in three stages between 1961 and 1972, Interstate 105 comprises a four-mile spur from Interstate 5 west to downtown Eugene. The freeway carries four overall lanes with additional auxiliary lanes through the east-west portion. At the Delta Highway, the freeway turns southward across the Willamette River onto the Jefferson-Washington Bridge, an elevated highway traveling between Jefferson Street south and Washington Street north. Interstate 105 ends at ramps to 6th & 7th Avenues (Oregon 99 & Oregon 126 Business).

Oregon 126 continues the Interstate 105 freeway east from Interstate 5 to 52nd Street in Springfield. The section west of Laurel & Q Streets opened in 1960 while the remainder of the highway saw completion by 1971. Pioneer Parkway links the freeway with downtown Springfield at Exit 5.

Oregon 569 is the Belt Line Highway, a belt route around the city of Eugene. At present the highway exists as a freeway from Barger Drive east to Interstate 5 near Gateway Mall. A two-lane expressway portion entails the north-south section of the road between Oregon 126 (West 11th Avenue) and Barger Drive. The roadway opened to traffic in 1966.

More of the Belt Line Highway was planned than was built. The 1967 highway plan for Eugene included an extension of the roadway south of Oregon 126 to Bailey Hill and northeast to the 30th Avenue Expressway near Lane Community College. That portion of the highway was canceled.3

The Delta Highway was built in 1966 to link Interstate 105 with the Belt Line Highway north of downtown Eugene.

Eugene’s 1959 highway plan called for an expressway to be built along the Amazon Creek in south Eugene.3 The north-south route would continue north to the Coburg Road viaduct at downtown. The 1967 revised the Amazon Parkway to include a full freeway from the Civic Stadium north to the Skinner Butte Freeway. It was proposed and later canceled.

The 6th / 7th Freeway was an alternative touted by the Trans-2000 plan voted on in 1978 by the city of Eugene. That project involved the construction of a freeway between 6th and 7th Avenues west of Interstate 105 and downtown to Oregon 126 (West 11th Avenue) near the Belt Line Highway. The 6th / 7th Freeway was shelved in favor of the West Eugene Parkway.3

The Skinner Butte Freeway was a proposed/cancelled east-west freeway parallel to the Willamette River from Interstate 105 and the Roosevelt Freeway near downtown Eugene to Interstate 5 near Glenwood.3 The routing appears on Eugene’s 1967 highway plan.

The Roosevelt Freeway was a planned limited access highway leading west from Interstate 105 near the Willamette River to Oregon 126 west of the city. The highway derives its name from the parallel Roosevelt Boulevard it was to replace. Origins of the project date to Eugene’s 1959 highway plan, which called for an east-west freeway from Interstate 105 west to River Road, and an expressway alignment from there northwest. By the 1967 Eugene plan, the Roosevelt Freeway grew to encompass a limited access highway west to Belt Line Highway and Oregon 126 west of Terry Street.3

Despite right of way acquisitions by the state, community opposition resulting from the potential neighborhood and riverside impacts killed the Roosevelt Freeway in the early 1970s.2 Opposition to the highway reached fruition in the 1978 adoption of the T-2000 transportation plan, which replaced the Roosevelt Freeway with a new east-west corridor. The new corridor later became known as the West Eugene Parkway, which was approved by 80% of Eugene voters in 1986.1

Oregon 99 follows the original U.S. 99 alignment through the city of Eugene. The state highway overlaps with Interstate 5 briefly northward from Goshen to Exit 192. At Exit 192, Oregon 99 heads west onto Franklin Boulevard to the University of Oregon campus and downtown Eugene. Following Broadway through downtown, Oregon 99 turns west at Coburg Road onto the one-way street couplet of 6th & 7th Avenues. Oregon 99 shares pavement with Oregon 126 Business between Interstate 5 and Interstate 105.

The former U.S. 126 turns north onto Garfield Street from West 11th Avenue to make the leap to 6th & 7th Avenues. There Oregon 126 merges with Oregon 99 for the approach to Interstate 105 and downtown. Once the tandem reach Jefferson and Washington Streets, Oregon 126 departs the U.S. 126 routing for Interstate 105 east across the Willamette River. Oregon 126 Business continues east with Oregon 99 through downtown Eugene.

Despite being shown as a freeway all the way to Oregon 126 Business (Main Street), the Oregon 126 freeway at Springfield ends at the intersection with 52nd Street. From there the four-lane highway curves southeast as an expressway to Main Street. Oregon 126 departs Springfield along the McKenzie Highway. 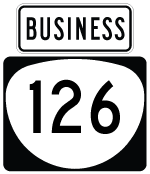 Oregon 126 follows the original U.S. 126 alignment through downtown Eugene and Springfield bypassed by the freeways to the north. See Oregon 99 for photos along the overlap in Eugene.

The West Eugene Parkway represents a proposed urban arterial from the downtown Eugene area west to Oregon 126.1 ODOT, Lane County, and the city of Eugene have planned the roadway since 1986 in an effort to mitigate growing traffic concerns in the area. Goals of the project include the construction of a 5.8-mile long access-controlled roadway between Oregon 126 and Interstate 105 to improve access to the west Eugene industrial and residential areas from downtown and to relieve congestion along West 11th Avenue (Oregon 126). The urban arterial is not a planned freeway but more of an access controlled expressway with signalized intersections and an interchange with Belt Line Highway.