An overview of the roads and freeways serving the Tri-Cities of Washington. 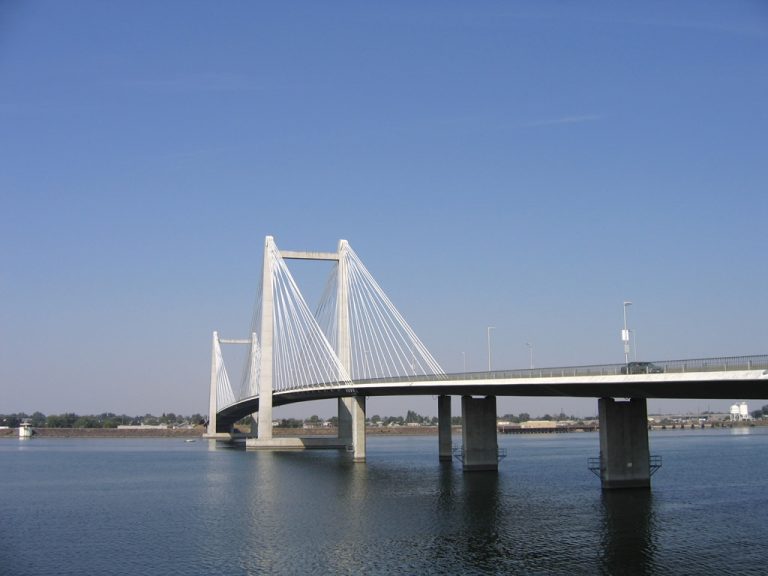 Washington State Route 397 spans the Columbia River across the Ed Hendler Bridge. Locally known as the Cable Bridge, the span was the second largest concrete cable-stayed bridge in the world. Photo taken August 28, 2006.

Interstate 82 was originally touted to run through Richland and Pasco of the Tri-Cities and along the east side of the Columbia River to Wallula. Changes were made in July 1969 to route the freeway west of the area en route to Umatilla, Oregon with the provision that the Tri-Cities be joined with I-82 via a freeway spur (Interstate 182).

Today Interstate 82 remains vastly rural, carrying four lanes from Horse Heaven Hills to Benton City and Kiona on the western outskirts of Kennewick and Richland. U.S. 395 and U.S. 12 share stretches of the freeway.

Interstate 182 travels 15.19 miles from Interstate 82 at Goose Gap through Richland and Kennewick. The freeway doubles as U.S. 12 for its entire length. Completed in 1986, the route provides a high-speed route to Yakima Valley from the Tri-Cities.

U.S. 12 follows all of Interstate 82 east from Yakima to Interstate 182 at Goose Gap. Interstate 182 dually carries U.S. 12 signage through Richland and Pasco, with U.S. 12 joining its original alignment from Lewis Street southeast to Burbank, Attalia Station and Wallula.

The surface route of U.S. 12 utilized Lewis Street west to 10th Avenue and the Green Bridge across the Columbia River. Turning westward through Downtown Kennewick, U.S. 12 used Columbia Drive to Columbia Park Trail and Kennedy Road west. When Interstate 182 was completed by 1986, U.S. 12 was relocated to share pavement with the freeway.

The Green Bridge, otherwise known as the Benton-Franklin Inter-County Bridge, opened on October 21, 1922 with private funding. The 23-foot wide span doubled as the Yellowstone Trail and was tolled until June 1931. U.S. 410 utilized the span until 1967 and U.S. 12 from 1967 until it closed on September 16, 1978, when the adjacent Cable Bridge was completed. The bridge sat unused for ten years until its demolition.

U.S. 410 was replaced wholly through the Tri-Cities in 1967 with the western extension of U.S. 12 to the Pacific coast. The route utilized the U.S. 12 path along the Columbia River with U.S. 395 from Wallula to the Green Bridge between Pasco and Kennewick. The SR 240 freeway from Columbia Drive in Kennewick to Richland carried U.S. 410 to Columbia Park Trail and Kennedy Road through West Richland and Benton City.

U.S. 395 follows Interstate 82 north from Umatilla, Oregon to Exit 113 at Kennewick. Turning northeast, the US Route follows a four-lane arterial through to the Blue Bridge across the Columbia River into Pasco. A brief overlap with Interstate 182 & U.S. 12 connects the U.S. 395 freeway from the Blue Bridge with the expressway leading northeast to Ritzville.

Historically, U.S. 395 shared pavement with U.S. 410 / 12 along the east side of the Columbia River from Wallula northward to Lewis Street in Pasco. Following North 4th Avenue, U.S. 395 joined Oregon Street for an exit of Pasco. When Interstate 82 was completed in 1985, U.S. 395 shifted from the eastern alignment to an overlap with the freeway and current alignment.

Washington 12 began in Kennewick and ran southward to Plymouth and westward along the Columbia River to U.S. 97 at Maryhill. The state route was renumbered to Washington 14 when U.S. 12 was extended west over U.S. 410 in 1967. SR 12 utilized Bofer Canyon Road north over Horse Heaven Hills to Southridge Boulevard and Union Street through south Kennewick. Completion of Interstate 82 overtook the original SR 14 alignment, resulting in the truncation of route to Exit 131 near Plymouth.

Designated in 1964, Washington 240 joins the Tri-Cities with Hanford Reservation and SR 24 at West Hanford Gate. Completion of Interstate 182 through Richland resulted in a relocation of SR 240 to follow the freeway between Exits 4 and 5. The state route was extended with the relocation of U.S. 12 onto I-182, following the former U.S. 12 freeway to U.S. 395 in Kennewick.3

SR 397 originally ran from Pasco southeast to Finley, a route first signed in 1992. The route was extended westward in July 2009 over the October 2008-completed I-82 to SR 397 Intertie roadway between Finley and Exit 114 of the freeway.4