Home » On The Road » Antelope Canyon III
Previous Next

And, finally, we have the third part of the trip – from Antelope Canyon to New Mexico. Daniel Brim and I, driving a cargo van… always fun exploring narrow old roads in a big old vehicle like that! 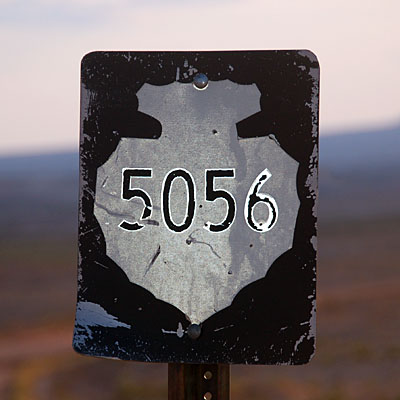 Here’s a 1950s Indian road sign! Complete with peeling numbers on some of the oldest engineer grade (does not fade to green) scotchlite I have ever seen. They invented the stuff in 1950 and this is not much newer than that. 18×12 inches; somewhere in southeast Utah near the Four Corners area. 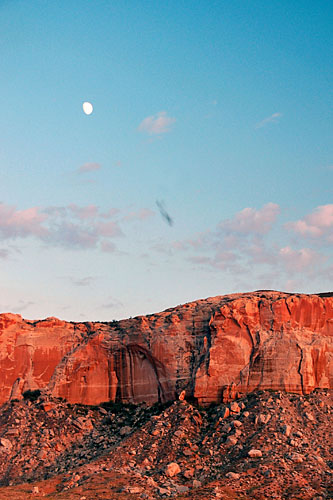 This might very well be a meteor in daytime! I just noticed this when I was processing these photos – note the smoke trail in the middle. I have the photo from 1 second before, and 4 seconds after, and they show nothing – but this one definitely has that black streak, which I believe to be a smoke trail from a very bright meteor. 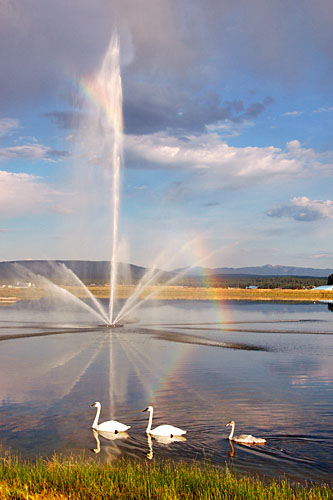 Behold the birds. Pagosa Springs, Colorado has this lake, fountain assembly… and swans! 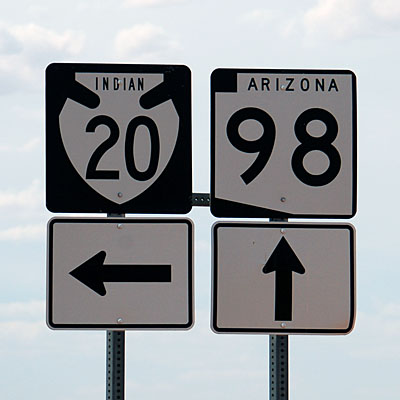 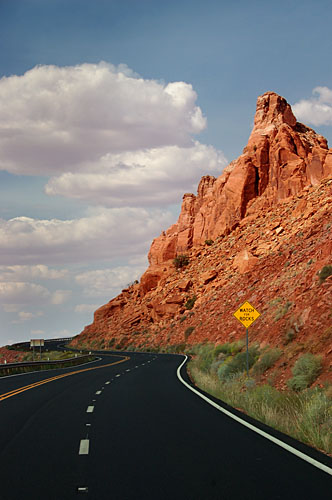 Looking back north towards Page on US-89. Watch for rocks. 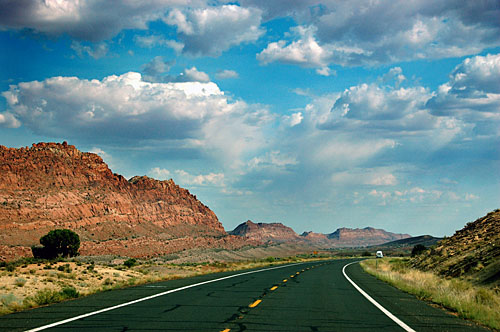 And we are approaching highway 160, but still southbound on 89. 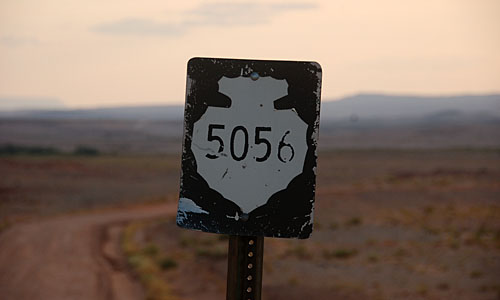 The sun begins to set… 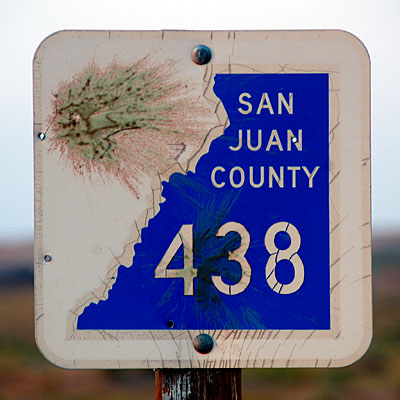 There are very few of these 1960s markers around for San Juan County, Utah routes. They all were originally orange and blue, and they have all faded in the sun. 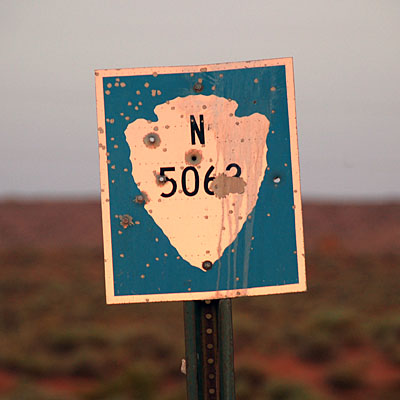 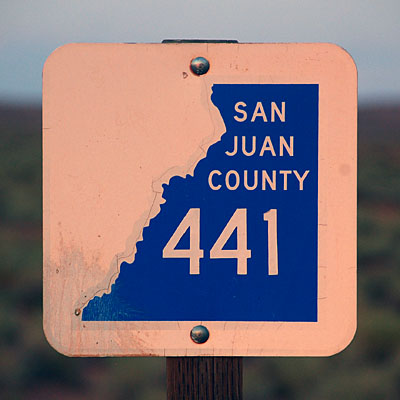 And here is an even older San Juan County marker, with the border barely visible around the entire sign. 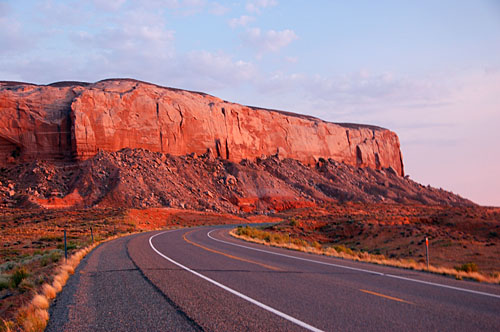 From the same general area as the meteor – here are the road and the red rocks. 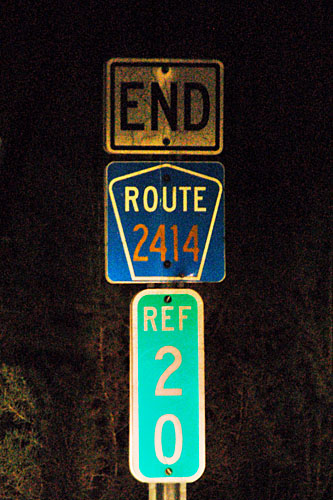 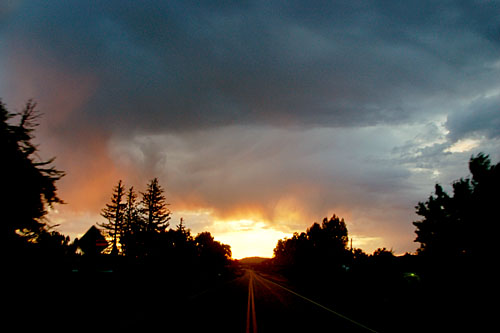 Next morning, in Colorado, where we head east on U. S. highway 160. 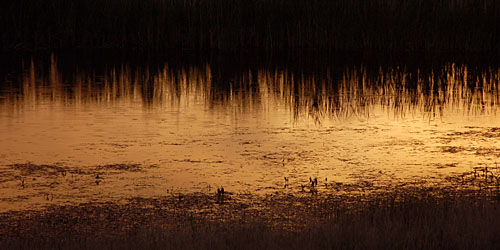 Sunrise making the reeds glow… a small lake not far from route 160. 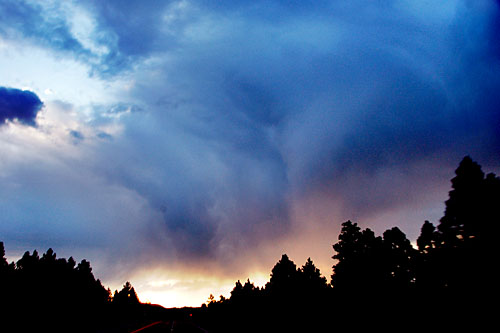 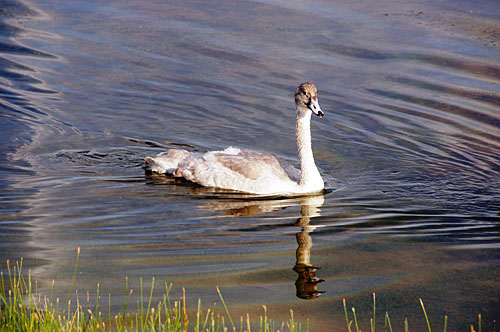 A view of a single swan. The males are white with black beak, and the females are grey with light grey beak. So now you know that this one is a … 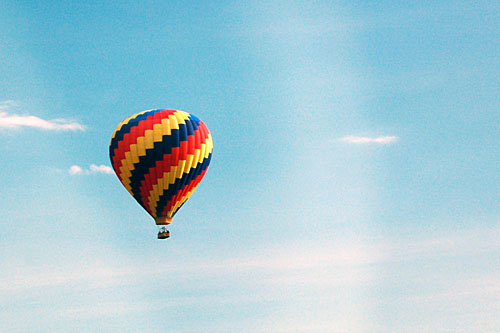 The Rocky Mountains are a source of wind currents – perfect for some ballooning in the morning as the sun warms the air and the currents rise. 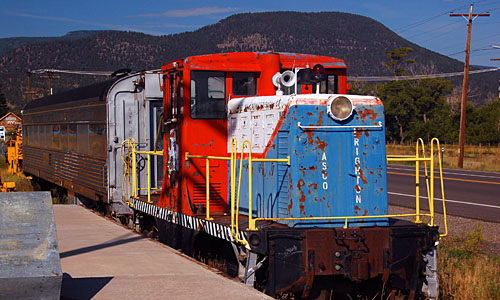 Further east on route 160 – by the side of the road is this long-unused switch engine with a red, white, and blue paint job. 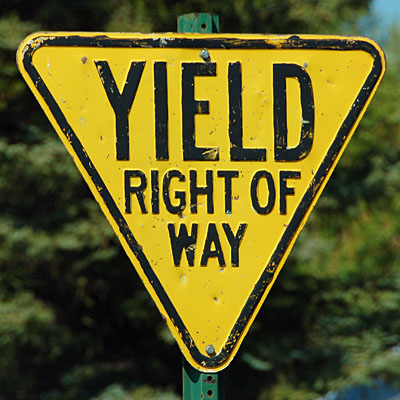 In a small town in Colorado – on the side streets, far away from the main highway (US-160), the entire grid is signed with these instead of modern stop signs. They are embossed, non-reflective, and date back to the 1950s. 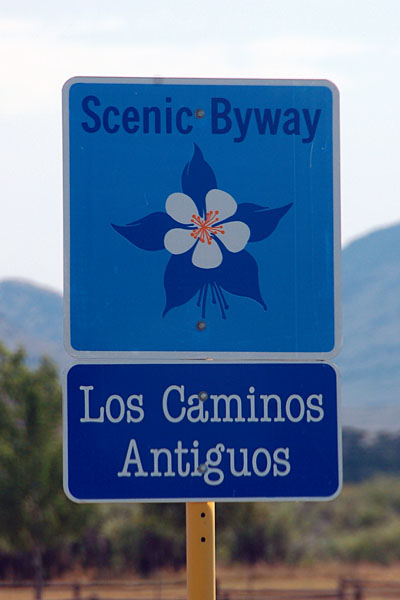 Colorado uses these blue shields for their scenic byways. 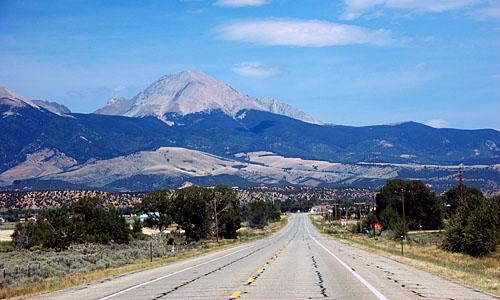 The mountains in late August – not a single flake of snow to be found. A brief detour off the 160 – we are on highway 12 approaching La Veta from the south. 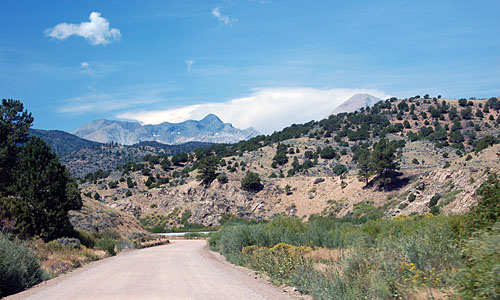 Old, old, old La Veta Pass – US-160 was bypassed from this route by the 1950s. This is the 1930s two-lane road. Ask us about how we followed the two-lane road across an old bridge and right onto someone’s private property – and how they beheld us for the freaks we were, and promptly refused to let us turn around in the driveway of their colossal mansion.

They insisted that the approach road (which is clearly marked as a county route) is private land! So we had to back out, nearly a quarter of a mile, in a cargo van – did I mention that exploring old roads in such a vehicle is more difficult than usual?

Dale knows all about this relatively unfriendly woman … when we told him the story, he immediately said “oh, county route 403 across the 1915 bridge? Yeah I once had to back out of there too……” 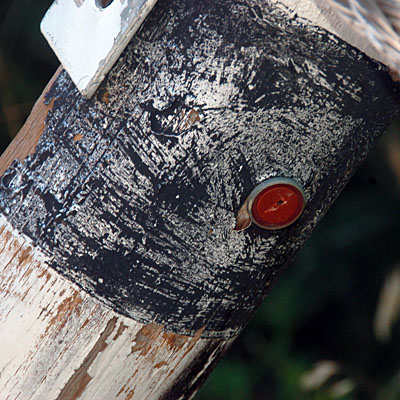 Not quite a glass cateye … here is a 1940s plastic Stimsonite reflector that replaced the old glass reflector in this original silver-and-black-painted fence from the 1930s. Old La Veta Pass, and these posts still remain from when this route was done between 1912 and 1937, and upgraded between 1949 and 1953, before being entirely bypassed in 1960. 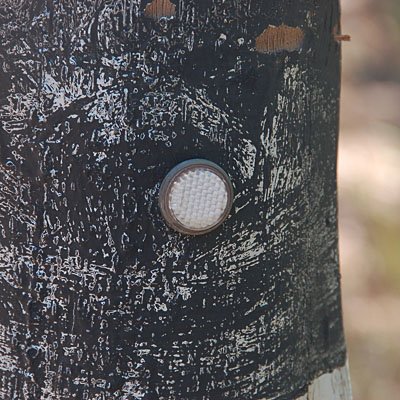 And here’s one that’s actually intact! The previous red one is just the backing – the reflective white matter long gone. Here you can see the white. 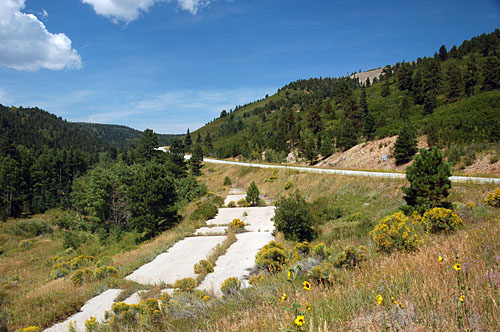 The end of the old route – you can see where the new and old roads branch. 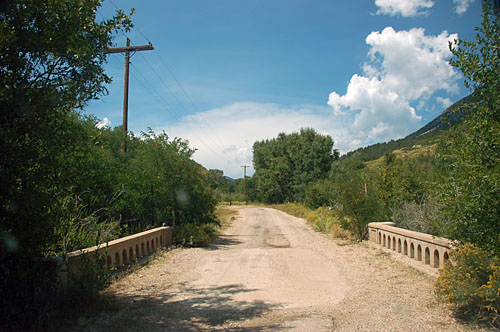 Another 1910s bridge. There are quite a few on the old La Veta Pass road. 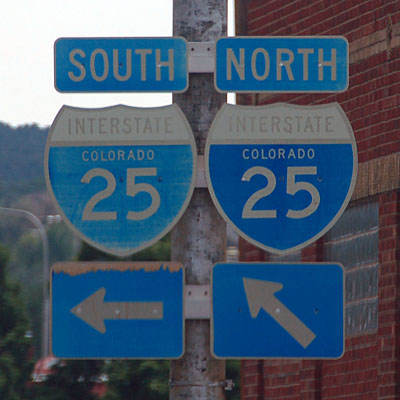 The very last pair of original (1958 specs) interstate shields in Colorado – most had vanished by the late 1970s, but there are two left, as late as December 10th of this year when I checked on them. And no, I will not reveal where they are. Suffice it to say, they are near interstate 25. 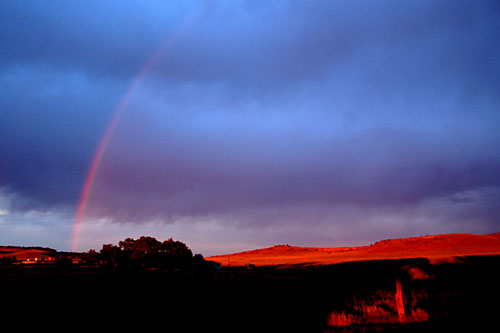 A red rainbow – at sunset, the atmosphere filters out most of the light that is not red. This is why sunsets are that color, and why this rainbow looks the way it does! This is when we ended up in Union County and our journey in the moving van was complete.

And that’s it ’til the next time! I think I’ll next upload some New Mexico and Texas route 66 photos from a trip just this November.