Delaware State Route 404 extends Maryland State Route 404 east from rural Caroline County to Bridgeville, Georgetown and Five Points in the vicinity of Lewes and Rehoboth Beach. SR 404 is the preferred route for through traffic between the Eastern Shore of Maryland and the Delaware beaches.

Entering Sussex County along Seashore Highway, SR 404 passes through the rural settlement of Adams Crossroads to SR 36 at Scotts Corner. SR 36 stems east to Greenwood, while SR 404 stays on Seashore Highway southeast toward Bridgeville. The state route bypasses Bridgeville to the north along Newton Road to U.S. 13 while SR 404 Business travels through the heart of town along Market and Main Streets.

U.S. 13 & SR 404 overlap south along eastern reaches of the Bridgeville corporate boundary to South Main Street and Seashore Highway. U.S. 13 Business & SR 404 Business end from the west as SR 404 rejoins Seashore Highway southeast. The signalized intersection between the four routes was realigned in 2008 so that both roads meet at a 90 degree angle.

Beyond the growing retail and residential development in south Bridgeville, SR 404 (Seashore Highway) angles southeast to merge with SR 18 (Cannon Road) ahead of the Nanticoke River. SR 404 ended here until sometime after 1985, when the route was extended along side SR 18 (Seashore Highway) east to Coverdale Crossroads and U.S. 9 (Market Street) at Georgetown.

A traffic study was undertaken in 1986 on the increasing congestion along east-west routes in Sussex County, including U.S. 9, SR 18, SR 26, SR 54 and SR 404. The study was coordinated with Maryland highway officials.1 A subsequent development in 1988 called for a consultant to design improvements to an east-west traffic corridor between Bridgeville and the Lewes area.2 The Sussex East-West Corridor Study was initiated by DelDOT in March 1989 to further advance recommendations from the previous studies for improving traffic along SR 404, SR 18 and U.S. 9. Included were alignments for bypasses around Bridgeville and Georgetown.

The proposal for an east-west freeway in Sussex County reemerged with House Transportation Committee authorizing DelDOT to undertake a feasibility study for a new road on June 2, 2004. Rep. Gerald W. Hocker, R-Ocean View referenced a previous feasibility study conducted in the late 1970s, which outlined a new route that was thought to be too costly. Since that time, Sussex County underwent substantial growth both with new residents and growing tourism appeal. With population figures expected to grow another 33% over the ensuing ten year period, Hocker and Sen. George H. Bunting Jr., D-Bethany Beach sponsored a resolution to address the growing traffic concerns.3 No capacity changes have been implemented since 2004, with the exception of a realignment onto a four-lane arterial between U.S. 13 and Bridgeville Center Road to accommodate new retail development. 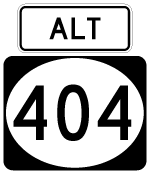 Originally SR 404 took Seashore Highway southeast to Market Street and Main Street (U.S. 13 Business) through the town of Bridgeville. Newton Road east to Adams Road at Cocked Hat and U.S. 13 (Sussex Highway) was designated as the northern leg of SR 404 Alternate by 1990. The alternate route overlapped with U.S. 13 south back to SR 404 (Seashore Highway) along its east leg. The bypass route was created in an effort to shift through traffic away from the historic town. Construction to the north of Bridgeville eventually reconfigured the split intersection of Adams and Newton Roads so that Newton Road traveled seamelessly. This led to the SR 404 relocation over SR 404 Alt in 1999, with SR 404 Business designated along the previous mainline route along Market and Main Streets town. 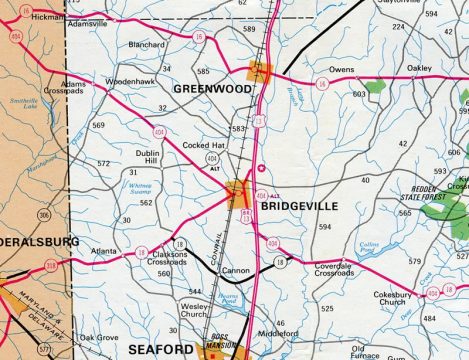