The history of Interstate 17 is tied into the route it replaced - Arizona State Route 69. In the 1930s, traffic planners realized the need for a faster route between Phoenix and Prescott. At the time, traffic had to take US 89, which was somewhat out of the way.

A new route up Black Canyon, called Arizona 69, was added to the state highway system in 1936, appearing on maps in 1938. The road was completed by 1940 to Prescott, and paved progressively up to Prescott.

As part of the Interstate Highway system, a route was designated from Phoenix to Flagstaff. This route became Interstate 17. 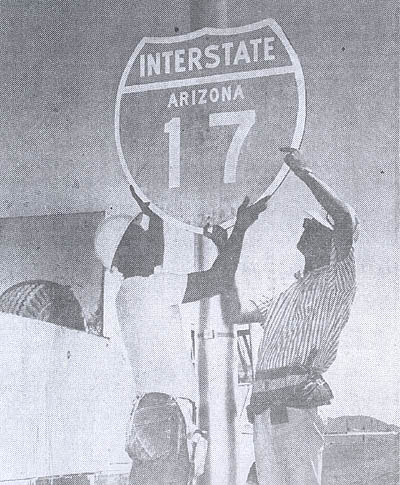 Interstate 17 begins near Sky Harbor Airport at Interstate 10, and travels west and north around downtown Phoenix, forming the west and south legs of the "inner loop". After crossing Interstate 10 again at the Stack interchange, the freeway heads due north roughly along 25th Avenue, transitioning to a 27th Avenue alignment at Dunlap Avenue. The freeway heads due north, meeting Loop 101 and Arizona 74 as it continues toward the suburb of Anthem.

After leaving Anthem, Interstate 17 finally leaves the Phoenix Metropolitan Area, reaching the towns of New River and Black Canyon City before leaving the low desert to climb quickly up to Black Mesa, passing through the ghost town of Bumble Bee. At the edge of the mesa is the Sunset Point rest area. The road stays fairly level at around 3500 feet elevation until passing Cordes Junction, where Arizona 69 branches off.

From Cordes Junction to Flagstaff, significant portions of Interstate 17 were originally constructed as a two-lane Interstate highway, with the other two lanes added later. The entire freeway was completed by 1978.

The mileposts on Interstate 17 begin at Milepost 194. Interstate 17's mileposts came from Arizona 69, which began at mile 201 of U.S. 89 originally (where the Grand Avenue overpass of Interstate 17 is today). Since Interstate 19's mileposts also correspond to U.S. 89, it has led to some speculation that Interstate 17 and 19 were supposed to be one freeway, which has never been in state highway system plans.

Dates noted are dates that the sections opened. In the case of the freeway north of Thomas Road, this is when Arizona 69 was turned into a limited access freeway.

I-17 has one decommissioned business loop.