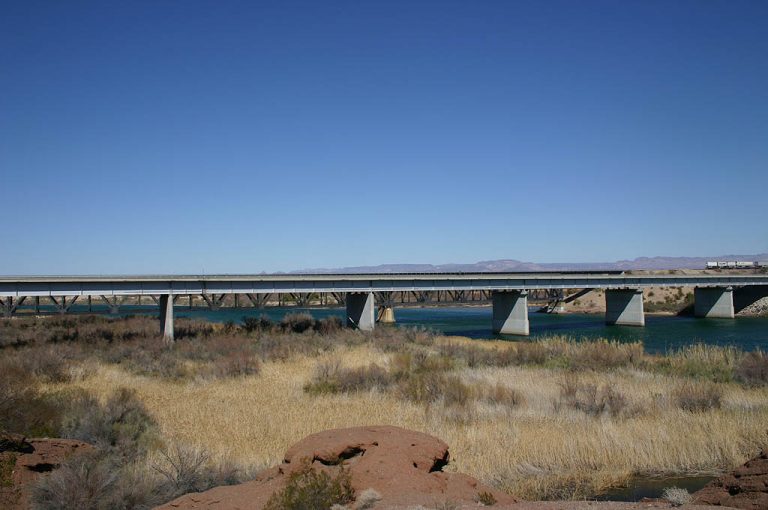 Interstate 40 spanning the Colorado River from an overlook along former U.S. 66 near the western end of the now-demolished Red Rock bridge. 03/03/07

Interstate 40 in Arizona has a much simpler background as compared to I-10 to the south. Interstate 40 enters the Grand Canyon State at Topock, along the Colorado River, and follows the BNSF (formerly the AT&SF) railroad tracks nearly the entire length across the state.

State Route 95 accompanies the freeway east from the Colorado River along an unmarked overlap. I-40 turns north from the state route to the railroad siding of Yucca to reach Kingman, the largest city in northwestern Arizona and childhood home of Andy Devine.

Interstate 40 resumes an eastern heading and overlaps with U.S. 93 and the Future I-11 corridor towards Seligman and Ash Fork. Both communities are railroad towns, but Seligman is more successful than Ash Fork, primarily because of increased tourism. Beyond Ash Fork, I-40 climbs over Ash Fork hill and circumvents the San Francisco Peaks through the high pine forests of Northern Arizona to Williams.

Continuing east from Williams, another railroad town and the gateway to the Grand Canyon, Interstate 40 reaches Flagstaff. Situated at the base of Humphreys Peak, the tallest point in state, Flagstaff is the most important city in Northern Arizona. It is home to Northern Arizona University and the Lowell Observatory.

Passing Flagstaff, Interstate 40 advances east to Winona via Walnut Canyon National Monument, then leaves the pine forests behind as it heads toward Meteor Crater and Winslow. Winslow, like many other towns along Interstate 40, owes it's existence to the railroad, but is now more famous because of the Eagles. "Standin' On A Corner" park was dedicated in 1998.

Leaving Winslow, Interstate 40 passes through the high grasslands of Northeastern Arizona, traveling through Joseph City and Holbrook. Beyond Holbrook, Interstate 40 ventures through Petrified Forest National Park and meets US 191 before leaving the state.

Interstate 40 in Arizona directly replaced the Mother Road - U.S. 66. US 66 was decommissioned in 1985, after the last section of I-40 opened on October 13, 1984. Flagstaff was the first city bypassed, in 1968. The loss of business was so great that Arizona DOT (ADOT) closed the freeway from October 12-28, so new signs could be posted to direct motorists into Flagstaff.

In 1965, there was a proposal to reroute Interstate 40 from Kingman to Searchlight, bypassing Topock. This proposal did not come to fruition, and the Topock route was confirmed in 1966.

I-40 originally had seven business loops, but two have been decommissioned.