The majority of Interstate 90 across Upstate New York follows the tolled New York State Thruway. The Erie Section of the toll road parallels the south shore of Lake Erie northeast from Shortman Road (Exit 61) near the Pennsylvania state line to U.S. 219 at Lackawanna. Staying outside the Buffalo city limits, I-90 is toll free north from U.S. 219 to I-290 (Exit 50). Turning east at Williamsville onto the New York Thruway mainline, Interstate 90 travels toward Batavia and south of Rochester.

Interstate 490 and I-390 north connect the New York Thruway with Rochester as I-90 proceeds east toward Syracuse. The toll road crosses the Syracuse metropolitan area from I-690 near Onondaga Lake to I-481 in the town of DeWitt. Continuing toward the Capital District, I-90 passes south of Rome to Utica, where I-790 spurs southwest to Downtown. Trending southward from Amsterdam, I-90 bypasses Schenectady, with I-890 connecting the Thruway with the city center. Interstate 87 takes over for the Thruway south to New York City as I-90 branches east across the city of Albany and south to the Berkshire Section of the New York Thruway at the town of Schodack.

The New York Thruway predates the Interstate system, having opened 115 miles west from Verona, near Utica, to Rochester on June 24, 1954. Bringing the total mileage of the Thruway system to 381, succeeding sections opened west to Buffalo on August 26, 1954 and east to Albany, including the section along I-87 south to Newburg on December 22, 1954.1 A 41 mile long segment of the Erie section of the New York Thruway opened to traffic southwest from the village of Silver Creek in Chautauqua County to U.S. 20 and Route 5 at the Pennsylvania state line on August 21, 1957.2 This left just 29 miles of the Thruway mainline as incomplete. The portion east from Silver Creek to Buffalo was completed on December 14, 1959, increasing the total mileage of the Thruway system to 506.3

The Berkshire Section of the New York Thruway initially opened from U.S. 9 at the town of Schodack to the Masschusetts state line following a ribbon cutting ceremony held on October 8, 1958. Construction continued on the remainder of the Berkshire Spur west six miles to the Hudson River and Selkirk until year's end.4 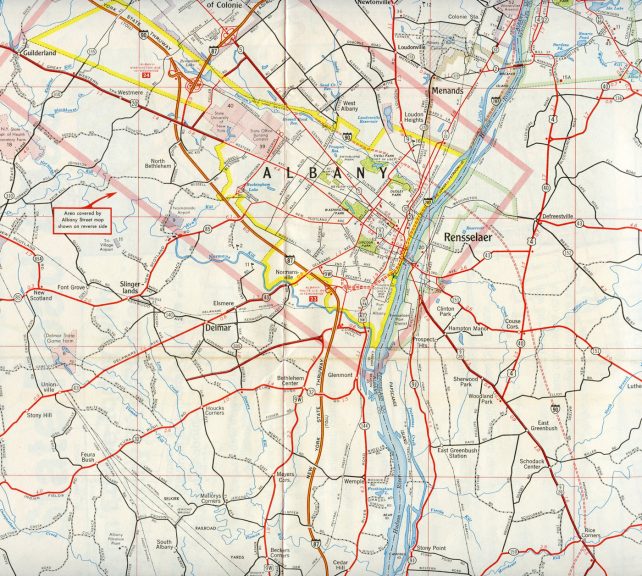 The proposed route of Interstate 90 through Albany in 1964.

Through Albany, Interstate 90 was initially dubbed "The Northside Route" in a 1954 report by the New York State Public Works Department. The first section of I-90 outside the New York Thruway built was the section between the Albany-Northway Interchange (Exit 24) and Everett Road (Exit 5) in May 1972. The succeeding section opened later in 1972 east to U.S. 4 (Exit 9). South from U.S. 4 to the Berkshire Spur was completed by 1973.5