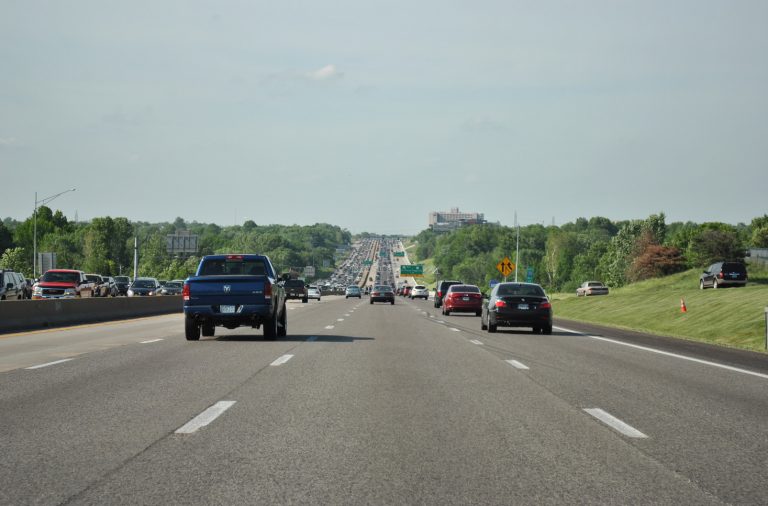 Heavy traffic crushes Interstate 270 southbound in this scene facing north at Creve Couer. The ten to twelve lane freeway along this stretch garnered 173,721 vehicles per day in 2011. Photo taken May 3, 2012.

Interstate 270 between Interstate 55 at Mehlville and Interstate 70 at Bridgeton was designated as Interstate 244 until 1974 and also the Circumferential Expressway. It was given the I-244 numbering in the early 1960s to correspond with traffic coming from Interstate 443 and completed in Missouri in 1967.4

Work upgraded the full-cloverleaf interchange between Interstate 270 and U.S. 40 (Interstate 64) between March 4, 19881 and December 7, 1993. Construction was projected to run for three to four years at a cost of $45-million, but ended a year later at $55.5-million.2 This project was similar to the upgrade at Interstate 70 undertaken in the early 1980s.1

A loop ramp from Interstate 270 north to Missouri 364 (Page Avenue) west (Exit 16) was replaced as part of a $22-million project. Completed July 23, 2011, construction added a new flyover to Page Avenue westbound and expanded I-270 north with an additional lane from Missouri 340 (Olive Boulevard) to Highway 364 west.5 Further north, the interchange at Dorsett Road (Exit 17) was converted to a diverging-diamond at a cost of $10-million by late 2010. This included the replacement of the I-270 overpasses above Dorsett Road.6

Variable speed limits were in use along Interstate 270 for three years to June 2011. Those were amended to become "advisory" speeds after a lukewarm reception by both the general public and law enforcement during their run.7

Expansion of Interstate 270 added a fifth lane northbound between Interstate 44 and Dougherty Ferry Road by December 19, 2012. Southbound grew by a lane during construction in 2013. The $11.2 million project restriped the travel lanes from 12 feet to 11 feet to accommodate the added capacity where rock bluffs and bridge columns prevented an overall widening of the roadway.8