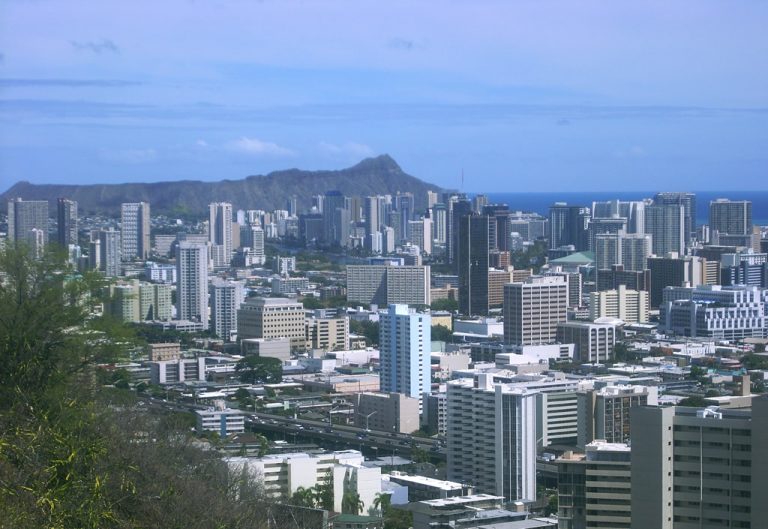 The view from Punchbowl National Memorial Cemetery southeastward of the Honolulu skyline and Diamondhead. Interstate H1 travels a viaduct over Pensacola and Piikoi Streets below. Photo taken by Larry Epstein (07-29-10).

Hawaii's oldest and most congested freeway, H-1 is the primary freeway along the south shore of Oahu. Beginning at the former Barbers Point NAS and Ewa plantation, it proceeds east around Pearl Harbor, dives south to serve Honolulu International Airport, then east through densely populated Honolulu and north of Waikiki Beach, to end short of Koko Head.

Portions of H-1 predate statehood, as an upgrade of Lunalilo Street, the freeway's namesake. The oldest section, from Punahou street east to King Street (Exits 23-25), was open before 1959. Originally signed as Hawaii 72, this section shows its age today, as it resembles freeways in downtown Los Angeles more than a present-day freeway.

H-1 is notoriously congested at all hours of the day, with little to no room for expansion. Hawaii DOT has some unique features on the western segment, including an HOV lane during morning rush hour where two westbound lanes are converted into an eastbound HOV lane. Some sections have been widened as time permits, but with the rapid growth of the Ewa area as a bedroom community for Honolulu, traffic will probably continue to worsen as time goes on.

The following timeline shows the general construction of Hawaii 72, later renumbered as H-1.