Traveling 300 miles across the state, U.S. 90 mostly acts as a local route to parallel Interstate 10 from the Texas state line to Lafayette, and from New Orleans east to Pearlington, Mississippi. The portion southeast from Lafayette to Interstate 310 at Boutte is part of Interstate 49 South, with several sections already converted to freeway, or slated for upgrading. U.S. 90 between Boutte and Avondale varies between four and five lanes as an arterial or divided highway. This section may be bypassed by Future I-49 if the interstate extends as far east as Downtown New Orleans. Otherwise U.S. 90 acts as a busy commuter and trucking corridor along this stretch to the Huey P. Long Bridge spanning the Mississippi River between Bridge City and Jefferson Parish. 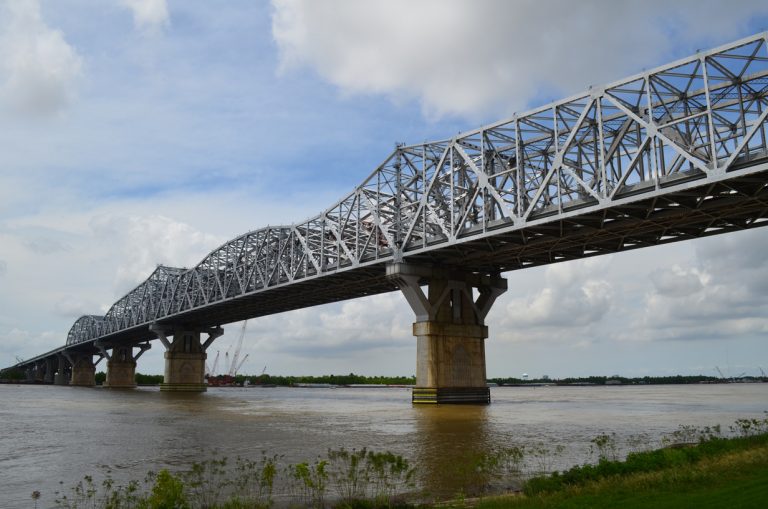 View of the Huey P. Long Bridge from the levee bike path along the south banks of the Mississippi River at Bridge City. Photo taken 05/09/15.

The Huey P. Long Bridge opened to traffic on December 16, 1935 with two New Orleans Public Belt Railroad tracks and four narrow travel lanes on a pair of 18 foot wide decks. Work on the original crossing commenced on December 31, 1932. It would be known as the the longest railroad bridge in the world at the time. Discussion to expand the crossing started in the 1980s. Officials envisioned a wider bridge acting as a catalyst to economic growth at western reaches of the West Bank. Initial projections for the overhaul were estimated at $220 million. With costs of material and storm related impacts from Hurricane Katrina and other 2005 systems, that figure ballooned to $1.2 billion when work commenced on the cantilever bridge in May 2006. The project was separated into four phases and slated for a 2012 completion.1

The antiquated crossing connected with Jefferson Highway and Clearview Parkway at Elmwood with a traffic circle on the east bank and with Louisiana 18 at a traffic circle by Bridge City on the west bank. Work through mid-2013 resulted in new 43 foot wide bridge decks for U.S. 90 east and west. The expanded bridge accommodated three 11 foot travel lanes with inside shoulders of two feet and outside shoulders of eight feet.2

Additionally flyovers were added at both bridge approaches to bypass signalized intersections with both Jefferson Highway and LA 18. The rotary at the south end of the Huey P. Long Bridge was eliminated by October 1, 2010, when westbound U.S. 90 traffic shifted onto a new alignment west of the parallel railroad tracks. Eastbound traffic temporarily used the old westbound lanes to allow for the completion of drainage work.3 A diamond interchange connects U.S. 90 with LA 18 and Bridge City Avenue now.

The expanded Huey P. Long Bridge includes sets of 2,650 ton trusses. These were lifted into place in three parts in 2010. 10 foot wide lanes opened temporarily in April 2012, and by the time the full lanes were open to traffic, capacity on the Mississippi River crossing doubled from 50,000 vehicles per day (vpd) to 100,000 vpd.1 The Huey P. Long Bridge was rededicated on the morning of June 16, 2013 during a ribbon cutting ceremony held on the new Jefferson Highway ramp. A 5k run and a parade accompanied the events.4 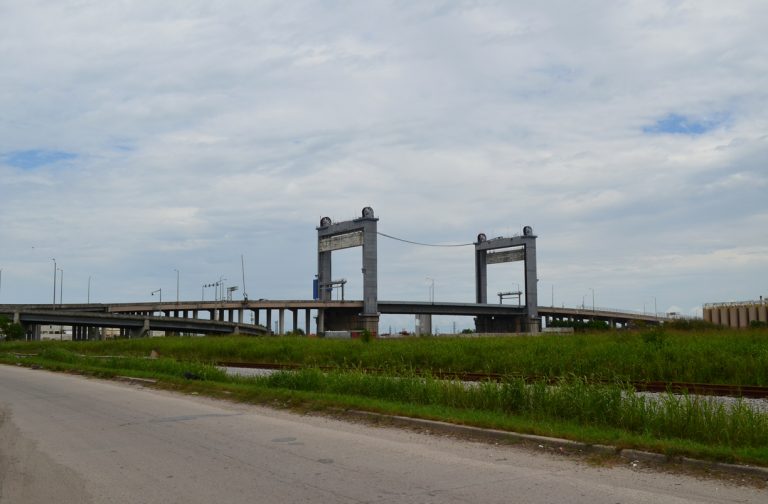 The Danziger Bridge is a vertical lift bridge connecting the Gentilly Woods and Pine Village neighborhoods in New Orleans. The 3,269 foot span accommodates six to seven lanes of traffic on a 91.8 foot wide deck. Ramps connect the west end of the span with France Road. The bridge opened to traffic in 1989.5

The Danziger Bridge gained national attention in the week following the landfall of Hurricane Katrina. An incident on September 4, 2005 involved a group of New Orleans police officers responding to an apparent distress call referring to gun shots on the ground and an injured officer under the span. The officers claimed they were fired upon, and responded with excessive force, shooting eight civilians crossing the span and killing two. The officers were eventually charged and tried.6

Further east at the Rigolets, a $50 million high rise bridge opened to traffic for U.S. 90 on January 15, 2008. Plans for the replacement span were unveiled ten years prior at an estimated cost of $20 million. The new mile plus long, 72 foot high crossing accommodates a 12 foot lane in each direction with 8 foot outside shoulders. The predecessor span was just 20 feet wide with no shoulders. The 1930-opened bridge also had a swing span, which required stoppages for traffic to allow boats passage. It was the main route between New Orleans and the Mississippi Gulf Coast until the mid-1960s, when Interstate 10 opened. Work on the new Rigolets Bridge started in October 2004, but was delayed by eight months due to Hurricane Katrina.7 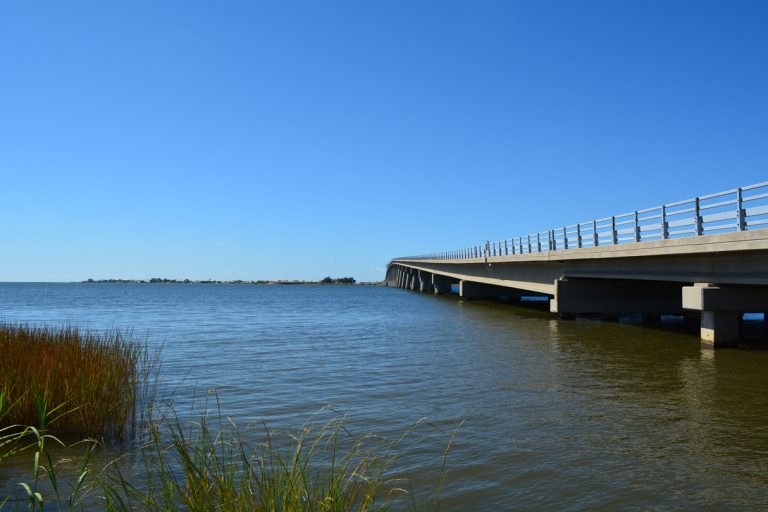 Looking south at the Rigolets Bridge toward Fort Pike. Work on the new Rigolets Bridge began in October 2004 at a projected cost of $20 million (1997 dollars). However the landfall of Hurricane Katrina delayed the project another eight months, adding to construction costs in the process. The new bridge increases the effectiveness of U.S. 90 as an evacuation route for future hurricanes.8 Photo taken October 12, 2016.