Interstate 10 travels 274 miles across the state of Louisiana from the Sabine River and Orange, Texas to Sulphur, Lake Charles, Lafayette, Baton Rouge, New Orleans, Slidell and an exit across the Pearl River into Hancock County, Mississippi. The freeway is part of a transcontinental route between Santa Monica, California and Jacksonville, Florida. Between Baton Rouge and Slidell, Interstate 10 leaves an east-west trajectory for a 108-mile arc southward to Laplace, Kenner, Metairie and New Orleans. Interstate 12 stays north of Lakes Maurepas and Pontchartrain to provide the through route for long distance travelers.

Across the state, Interstate 10 contains several lengthy stretches of elevated roadway including the Acadian Thruway through Livingston Parish, the ten-mile viaduct between Interstate 55 at Laplace and Kenner, and the 5.5-mile Twin Bridges over Lake Pontchartrain. 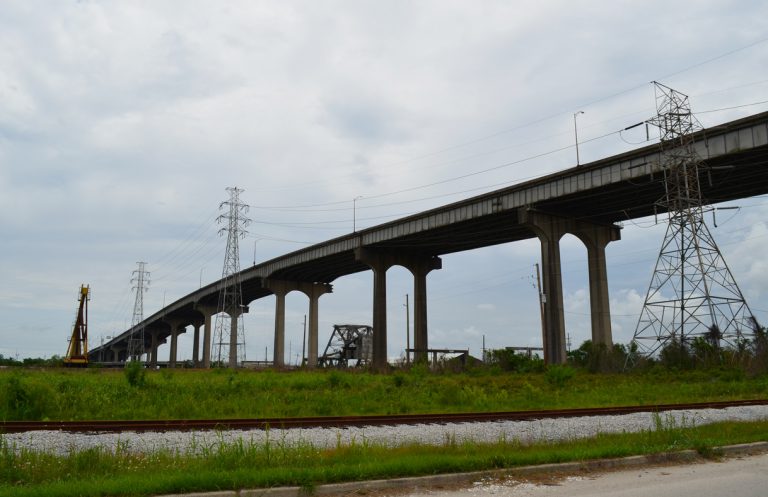 An 11.4 mile section of I-10 opened to traffic in February 1964 between U.S. 165 at Iowa and U.S. 171 at Lake Charles. Ongoing work at the time included an 11.5 mile section west of Sulphur to Vinton, which was 55 percent complete. The succeeding 6.4 mile segment west from Vinton to Toomey went to contract in February 1964. East from Iowa, a 22-mile stretch of I-10 was under construction through November 1964. It eventually linked with the 16 mile long Jennings to Crowley portion of I-10 previously completed in 1963. $85.5 million in state and federal funds paid for both I-10 and I-210 (Lake Charles Bypass) in the seventh district of the Louisiana highway department.2

A $24.3 million project began in the spring of 2006 to replace the aged concrete surface of Interstate 10 between Interstates 12 & 59 and the Twin Bridges through Slidell. The 6.65-mile project involved the rubblizing of the concrete road bed and the overlay of six inches of asphalt pavement. Completion occurred by November 2006.4

A $803-million project replaced the Hurricane Katrina damaged Twin Bridges over Lake Pontchartrain between June 2006 and September 2011. The new spans expanded the freeway from four to six overall lanes. They were formally named the Frank Davis 'Naturally N'Awlins' Bridge during a ceremony held on June 19, 2015. Coining the tag line "Naturally N'Awlins" during his broadcasts for WWL-TV, Frank Davis was a long time television personality known in the New Orleans and Slidell area. Legislation renaming the spans to honor Davis, who passed away in 2013 at age 71, was approved by the Legislature in 2014.5 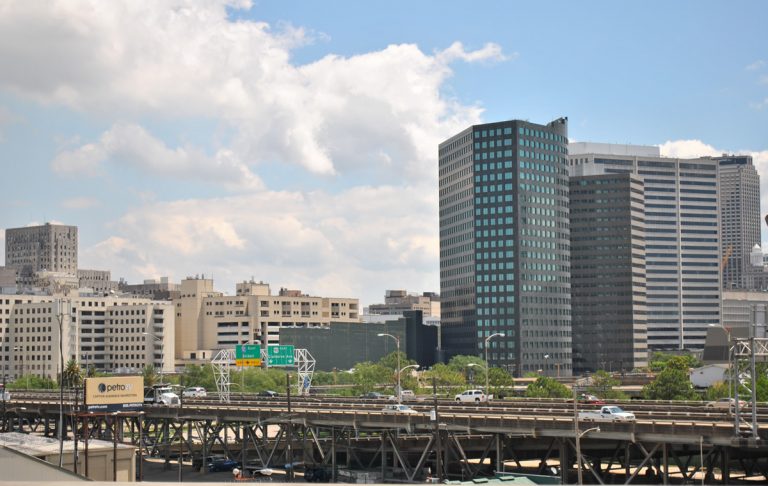 The Claiborne Avenue viaduct travels by the Superdome before splitting with U.S. 90 east and joining Interstate 10. 04/20/12

Freight traffic comprises one third of the volume along Interstate 10 between Lafayette and the Atchafalaya Basin Bridge. A $300 million, two-phase project, partially funded by a $60 million federal grant aimed to improved freight corridors, addresses capacity issues along this stretch. Beginning in 2017, expansion during the two-year long, first phase will add two lanes to I-10, between Interstate 49 (Exit 103) and Breaux Bridge (Exit 109), and from Henderson (Exit 115) east to the Atchafalaya Basin Bridge. The second phase, scheduled to start in the 2018-19 fiscal year, will six lane the intervening segment. Additionally the 1960s-built roadway will be rebuilt and Exit 115 with LA 347 will be converted to a dumbbell interchange.6