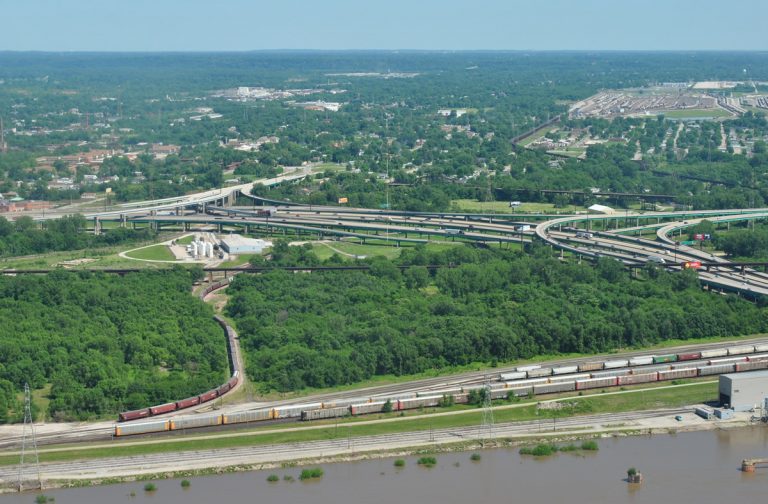 Directional T-interchanges lie east of the Poplar Street Bridge, joining I-55/64 with IL 3 from Sauget to the south and a freeway stub (unconstructed U.S. 460) into East St. Louis. 06/01/11

Interstate 55 vastly replaced the routing of U.S. 66 northeast from St. Louis to Springfield, Bloomington-Normal, and Wilmington while en route to Chicago. The freeway directly overlaid many four lane sections of U.S. 66, with some segments of the route relegated to frontage roads or as business loops through cities bypassed by the freeway. Within Chicago, Interstate 55 follows the Stephenson Expressway to a northern terminus at U.S. 41 (Jean Baptiste Point DuSabale Lake Shore Drive) off of Lake Michigan.

Interstate 55 was finished in Illinois with the completion of the Dwight bypass of old U.S. 66 in 1980.1

Interstate 55 at Veterans Parkway (Business Loop I-55) on the north side of Bloomington was revamped over a two year period between 2002 and October 2004. A $37 million project reconfigured the exchange from a directional interchange with a left exit ramp from I-55 south to Veterans Parkway south into a six-ramp parclo interchange. This added access to Pipeline Road north from I-55 south.2