Interstate 64 travels for 124 miles across Southern Indiana following the route of the old U.S. 460 upon its completion in the late 1970s. The interstate was originally planned to go from Louisville along U.S. 150 to Vincennes before heading west across Illinois along U.S. 50. But political influence from Evansville, the third largest city in the state and largest at the time that was not connected via an interstate, moved the highway south to the U.S. 460 alignment.

The resulting highway however is the most scenic among Indiana interstates. It crosses the Wabash River from Illinois and passes about 20 miles through rolling fields to the north of Evansville where it connects with U.S. 41 and Interstate 164 / Interstate 69 / Indiana 57. From there, the terrain gets hillier as it crosses the Hoosier National Forest in dramatic fashion. The Interstate passes by Corydon and New Albany as it descends the Knobstone Escarpment before crossing the Ohio River via the Sherman Minton Bridge into Louisville, Kentucky. 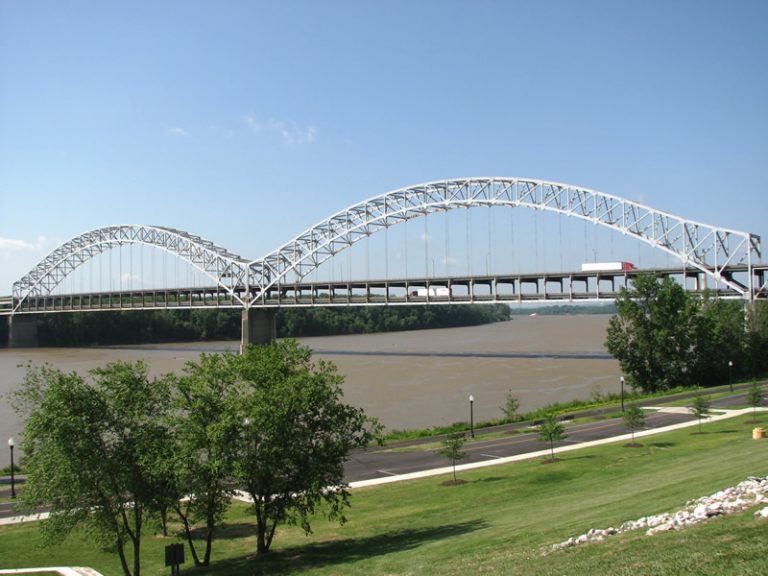 Interstate 64 spans the Ohio River over the Sherman Minton Bridge between New Albany and Louisville, Kentucky. The bridge opened in 1962 at a cost of $14.8 million.1 Photo taken by Justin Cozart (06/05/08).