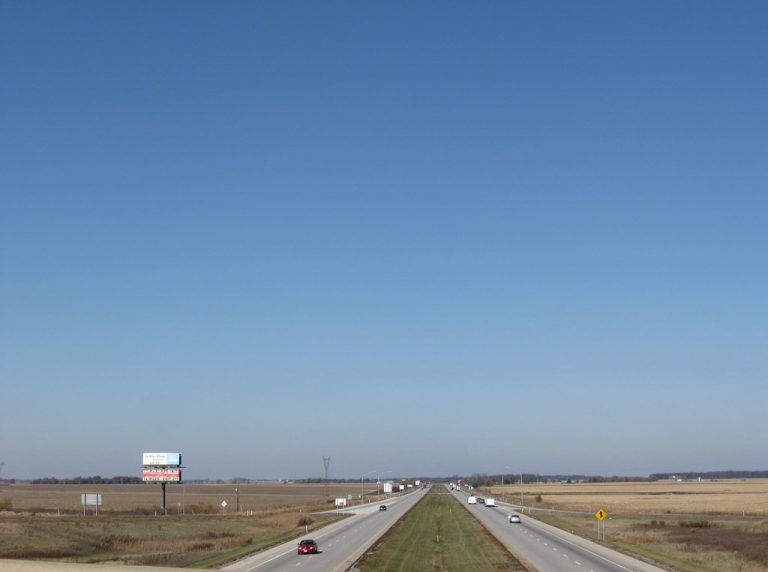 Connecting Indianapolis, the largest city and capital of Indiana, with Louisville and the Falls City area and the Greater Chicago Metropolitan region, Interstate 65 is the second longest in the Hoosier State. The freeway was built between the early 1960s and 1970s when the combined section with I-70 in Downtown Indianapolis was completed. I-65 supplanted U.S. 31 from Louisville to Indianapolis and U.S. 52, along with parts of U.S. 41, between Indianapolis and Gary as the primary Indianapolis-Chicago route.

The first 10 miles of Interstate 65 are in the Southern Indiana suburbs of Jeffersonville and Clarksville, across the Ohio River from Downtown Louisville. North of Sellersburg, the highway heads north through rolling hills past Scottsburg, Seymour and Columbus. North of there it enters the till plain of Central Indiana as it passes by Franklin and Greenwood before crossing the urban center of Indianapolis, where the heaviest traffic along the interstate is. North of Indy, the highway returns to the rural plains of the state as it goes by Lebanon, Lafayette, and Renssellaer before ending in the Northwest Indiana suburbs at the Indiana Toll Road.

Construction began in July 2013 on a new northbound span for Interstate 65 across the Ohio River. The new cable-stayed bridge opened to northbound traffic on December 6, 2015. Southbound I-65 moved onto the bridge on December 16, 2015 while the adjacent Kennedy Bridge underwent rehabilitation to late Summer 2016. 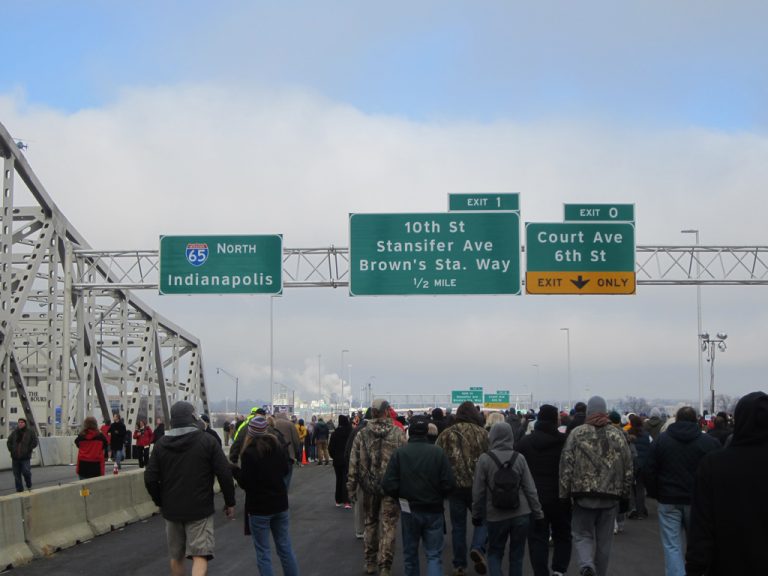 Crossing into Indiana along the Abraham Lincoln Bridge during the public bridge walk held on December 5, 2015. Photo by Tom Reaugh.

The Abraham Lincoln Bridge consists of four spans supported by three towers. The sections include two 750 foot long center spans and two 303 foot long outer spans. The outer two towers rise to a height of 198 feet while the center tower tops out at 254 feet. Overall the cable stayed portion of the bridge totals 2,106 feet in length, with the north approach adding another 1,060 feet to the span. In comparison, the adjacent Kennedy Bridge is 2,497 feet long with a 659 foot approach. The Abraham Lincoln Bridge provides a 71 foot navigation clearance above the normal pool elevation of the Ohio River.1 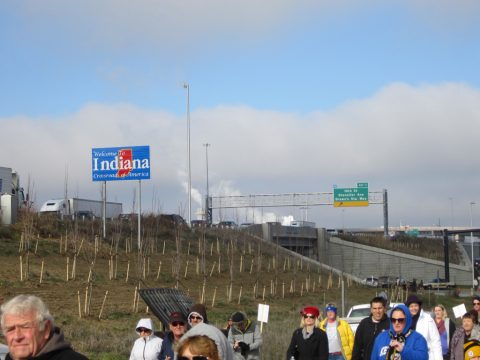 Welcome to Indiana sign posted at the north end of the Abraham Lincoln Bridge by Court Avenue in Jeffersonville. Photo by Tom Reaugh (12/05/15). 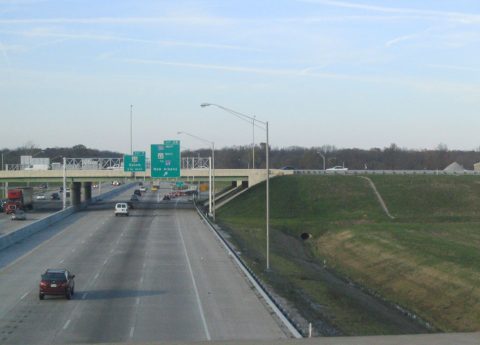