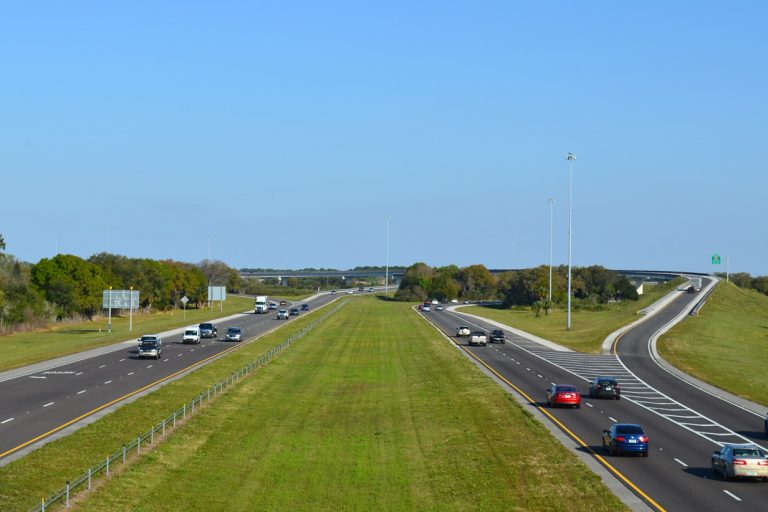 Motorists travel along Interstate 275 near its southern terminus with Interstate 75 in Manatee County, as seen from the 36th Avenue East (Ellenton-Gillette Road) overpass. 02/12/15

Interstate 275 is the primary urban freeway serving the Tampa-St. Petersburg metropolitan area, spanning a distance of 60.6 miles from I-75 in north Manatee County through St. Petersburg and Tampa via the Sunshine Skyway and Howard Frankland bridges. The northern apex with I-75 lies at the Hillsborough / Pasco County line between Lutz and Wesley Chapel.

Portions of Interstate 275 through Tampa and St. Petersburg were originally constructed and opened with the I-4 and I-75 designations:

The remainder of Interstate 275 through St. Petersburg to Interstate 75 near Ellenton was completed in stages between 1978 and 1987. During this time period the freeway was extended south from Downtown St. Petersburg to U.S. 19 south near the north Skyway toll plaza and from Interstate 75 in Manatee County to U.S. 19 north near the south Skyway toll plaza. Those sections of freeway were opened to traffic by 1985. The remaining piece of Interstate 275 though would not open until April 30, 1987 when the current Sunshine Skyway bridge opened to traffic. The new cable-stayed structure replaced the original cantilever spans across Tampa Bay, one of which (the southbound span) was severely damaged in a freighter accident in May 1980.

The Sunshine Skyway is a cable-stayed bridge that carries Interstate 275/U.S. 19 across the mouth of Tampa Bay, connecting Palmetto with St. Petersburg. For more information on this famous crossing, please see the Sunshine Skyway Bridge guide.

Constructed in the late 1950s and opened in January 1960, the Howard Frankland Bridge became the third crossing over Old Tampa Bay to link Hillsborough and Pinellas counties. Named after the businessman who lobbied for its construction, the Howard Frankland was built as a part of Interstate 4 and carried four lanes of traffic (two each direction) separated by a barrier. As traffic demands steadily increased in the 1970s and 1980s, a second span was built parallel to the original span, and opened to traffic in 1990. The new span carried southbound traffic while the 1960 crossing was rehabilitated to accommodate northbound traffic. Today the Howard Frankland bridge carries eight overall lanes (four on each span) over Old Tampa Bay, providing a necessary link between the St. Petersburg and Tampa areas. A Project Development and Environment (PD&E) study preceded work anticipated for 2020-24 to construct a new span to replace the 1960 bridge and upgrade the 1990 crossing with provisions for a regional transit corridor.