U.S. 92 spends approximately two-fifths of its route merged with U.S. 17. The two highways share pavement between Lake Alfred and DeLand. Parts of the route through Orange County are known as the Orange Blossom Trail. Both U.S. 92 and its sole "child" route, U.S. 192, are located entirely within the state of Florida and are less than 300 miles long, so under the guidelines set forth by the American Association of Highway and Transportation Organizations (AASHTO), U.S. 92 and U.S. 192 should have been decommissioned. However, given the geography of the Florida peninsula, an exception seems warranted in order to allow east-west U.S. routes to serve the area. 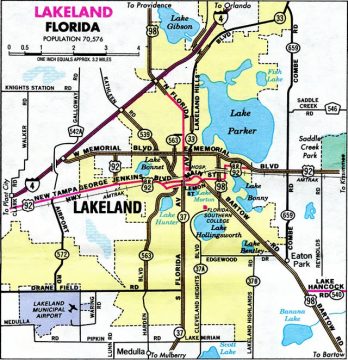 US-Highways.com indicated that the lone business route for U.S. 92 along Florida 600 was decommissioned in 1998, but many maps continued to acknowledge this urban route through the 2000s.

The Gandy Bridge was the longest automobile bridge in the world when it first opened on November 20, 1924. The vision of Tampa businessman George "Dad" Gandy, who sought an easier link to St. Petersburg to improve area business, led to its construction. When it opened, the driving distance between Tampa and St. Petersburg dropped from 42 to 19 miles.1

The original two-lane Gandy Bridge was tolled until 1944, when the federal government paid $2.4 million to the bridge management company in an effort to help the war. The 1924-span remained in service until 1956, when a new bridge opened to replace it. A second span was added by 1976 for eastbound traffic, doubling the capacity between St. Petersburg and South Tampa.1 Deterioration of the westbound 1956-bridge led to the construction of its replacement in 1994 as part of a $31.2-million bridge improvement project.2 The 2.6-mile span opened on December 21, 1996 at a height of nine feet above its precedesser.1 The 1956 bridge was then closed to vehicular traffic and later reopened as the Friendship Trail for pedestrians and bicyclists. Dangerous deterioration due to steel corrosion of support elements led to its permanent closure on November 6, 2008.3