Interstate 4 angles northeast across the Florida peninsula, traveling 132 miles from Tampa to Lakeland, Orlando and Daytona Beach. The intrastate route serves major population areas in Central Florida along the U.S. 92 corridor. Heavy development along the freeway over the years resulted in several toll roads to provide alternate routes and relief, including the Central Florida GreeneWay / Seminole Expressway (bypass to the east of Orlando), Daniel Webster Western Beltway / Wekiva Parkway (bypass to the west of Orlando), and Polk Parkway around Lakeland. Additionally much of the freeway was expanded to six or more lanes, with the final four lane stretch in Volusia County expanded by Summer 2015.

I-4 Beyond the Ultimate will further extend the I-4 Express Lanes in both directions for a total distance of 20 miles.
Interstate 4 through the Ultimate I-4 Project area between SR 408 (East-West Expressway) at Downtown Orlando and SR 423 (Lee Road) at Winter Park. 07/09/16

Separate work underway from June 2018 to 2022 adds new flyovers to directly link Florida's Turnpike with Interstate 4. This construction is part of an $85 million project expanding the Turnpike to ten general use lanes from the Beachline Expressway (SR 528) north to I-4. Included is the installation of six new all electronic tolling points and the removal of toll booths along the ramp system connecting the Turnpike with I-4. 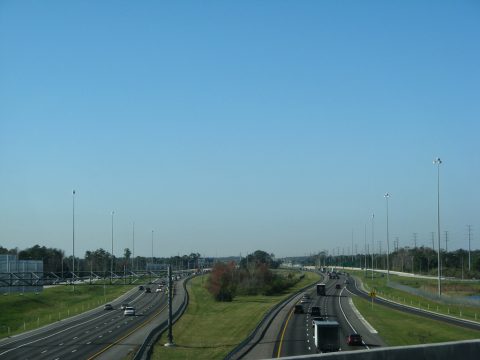 Four roadways, two of the I-4 mainline and two consisting of c/d lanes, come into view south of the wye interchange between Interstate 4 and SR 417 (Central Florida Greeneway). 02/16/08 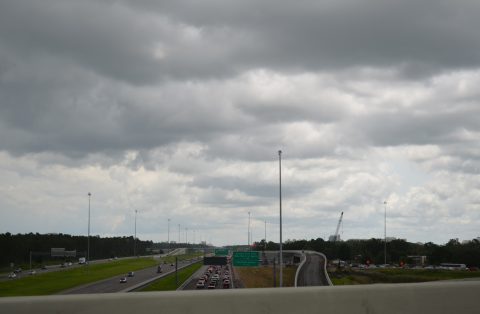 Ramps between I-4, U.S. 192 and Osceola Parkway were unraveled as part of road work completed by winter 2014. This view looks north at the overpass built from I-4 east to Osceola Parkway. 06/29/13 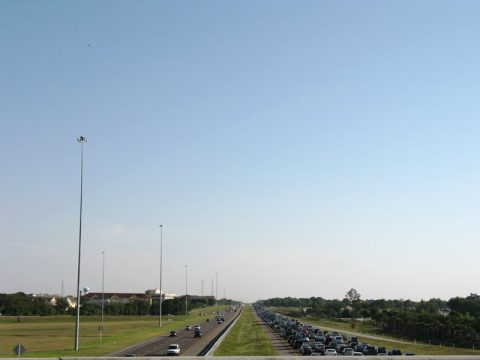 The result from when an accident hampers traffic during the evening commute along Interstate 4. April 29, 2008 looking south from Lake Mary Boulevard at I-4. 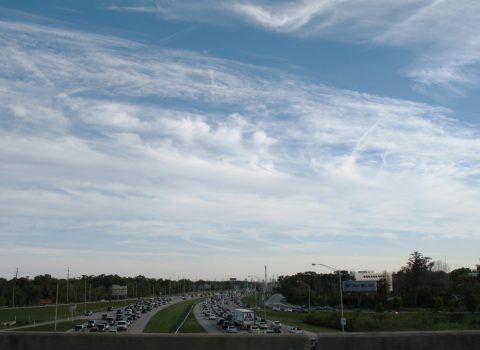 Construction of Interstate 4 occurred between 1958 and 1966. The entire length doubles as hidden State Road 400, with SR 400 extending east from I-95 as an at-grade route to U.S. 1 in Daytona Beach.

The St. Johns River Veterans Memorial Bridges at Lake Monroe were built during a $110 million project that included widening seven miles of I-4 north from CR 46A at Sanford to Saxon Boulevard in Deltona.2,3 Replacing a 56 foot wide, four-lane span built in 1960 for $1 million, work on the twin 58 foot wide bridges across the St. Johns River started on March 17, 2001.3,4 The westbound span opened initially for traffic exiting to U.S. 17/92 in January 2003,5 and with two lanes for the I-4 mainline on April 28, 2003.3 Following completion of the approaches, the eastbound span opened with two lanes on the morning of June 28, 2003. Nine months of demolition work for the old span commenced in July 2003.4 Construction at the St. Johns River wrapped up on May 25, 2004, when the third eastbound lane opened. Widening of I-4 westbound was finished in March 2003; work on eastbound to Saxon Boulevard continued through Summer 2003.2