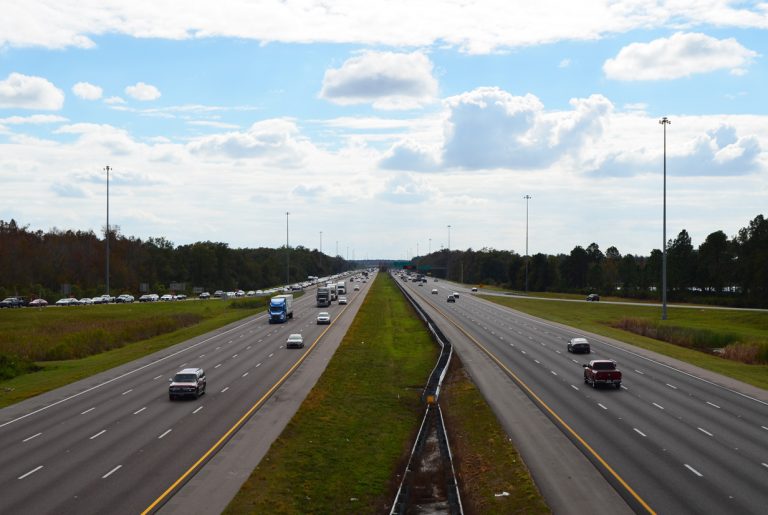 Looking south along Interstate 75 toward the I-275 split (Exit 274) as traffic flows beneath the SR 56 at Exit 275 in Pasco County. Motorists can be seen sitting idle along a portion of the 2.1 mile ramp that joins I-75 north with SR 56. This ramp typically sees prolonged traffic backups on a daily basis. 01/16/17

Interstate 75 is the longest freeway in Florida, traveling nearly 471 miles from the Miami area to the Georgia border. Beginning at SR 826 (Palmetto Expressway), I-75 travels north the first 19 miles before turning west at I-595 and SR 869 (Sawgrass Expressway) toward Naples. The freeway stretches across the state through the Everglades via Alligator Alley (toll facility) before curving northward again through southwest Florida, passing Fort Myers, Punta Gorda, Sarasota, and Bradenton to the east. I-75 then bends around the east side of the Tampa area before turning northeast to meet the Florida's Turnpike at Wildwood. One more kink northwest takes the freeway by Ocala, Gainesville and Lake City before entering Georgia near the town of Jennings.

The original plan authorized by the Federal Highway Act of 1956 called for Interstate 75 to end just shy of Downtown Tampa at an interchange with Interstate 4. By the mid 1960s, however, several cities in southwest Florida lobbied for a connection to the Interstate system. Using the previous West Coast Turnpike proposal as a footprint, an extension of I-75 southward from Tampa to Miami took shape, and by July 1968 the extension was included as part of the Interstate network for Florida. The 252 mile extension was formally approved December 13, 1968.1 Several alignment changes and 25 years later, the southern section of Interstate 75 was complete between Pasco County and Hialeah.

The 212 mile Interstate 75 freeway opened to traffic in segments between 1963 and 1968 from the Florida/Georgia line south to Tampa. A slight adjustment occurred in 1961 to bring I-75 closer to Ocala and Wildwood to meet up with an extension of Florida's Turnpike.2

Work is ongoing to widen Interstate 75 through Pasco, Hernando, and Sumter counties. Expansion work through Pasco County was finished in March 2018, while construction further north continues through 2019.

Plans for the southern extension of Interstate 75 from Tampa to Miami date back as far as 1964, during which time a west coast turnpike was also proposed to link Tampa with Naples. Local opposition across Southwest Florida grew over the proposed toll road and by 1968 was dropped in favor of a toll-free I-75 extension. 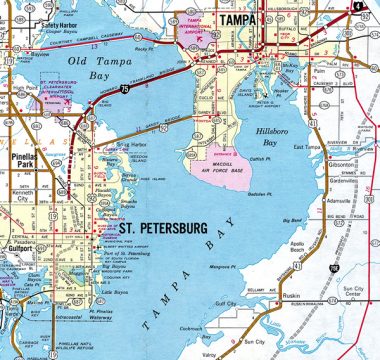 The initial proposed I-75 extension would be routed through St. Petersburg while the Tampa bypass would carry Interstate 275 around the east side of the bay area. As a part of the extension, Interstate 4 was truncated to the Downtown interchange and replaced with I-75 toward Pinellas County and St. Petersburg. Studies though determined that it would be too expensive to maintain the freeway through the cities with the estimated high traffic volumes. One idea was to designate the Tampa bypass as Interstate 75E, but due to a 1973-based AASHTO rule that suffixed routes be renumbered to reduce motorist confusion, that designation was shelved. Instead, the I-75 and I-275 designations were swapped into their current configuration.

A I-75 NOW Task Force organized in 1975, and successfully lobbied to secure funding to build I-75 through Southwest Florida quicker than originally scheduled.4 The task force was formed by civic leaders and several politicians and businessmen to fast track the completion of Interstate 75 through Southwest Florida after predictions that the Tampa-Miami freeway would not be finished until after 2000.5

The Tampa bypass portion of Interstate 75 began construction mid-July 19796, and would take seven years to complete. When the final piece opened July 1986, I-75 was seamless between Sault Ste. Marie, Michigan and Alligator Alley in Naples.

The majority of Interstate 75 through Southwest Florida maintains at least six lanes of traffic, with construction ongoing or planned for the remaining segments. 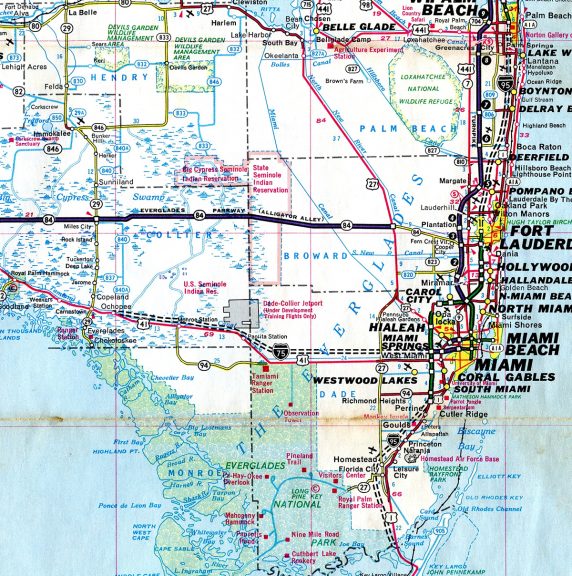 Leaving Southwest Florida, three ideas were proposed for taking I-75 across the vast everglades to the Miami area. One proposal took Interstate 75 southeast parallel to U.S. 41 (Tamiami Trail) through the Everglades, then connecting it with SR 836 (Dolphin Expressway, formerly East-West Expressway) for the remainder to Miami. Its end would have been at the Midtown Interchange between I-95 and I-395. This proposed routing would also take the freeway close to the Dade-Collier Jetport (now defunct) which was under development at the time. Another proposal extended the freeway across the two lane Alligator Alley (State Road 84) between Naples and Andytown then turn it southerly to reach Miami. A third and least favorable of the proposals, called for the freeway to turn southeast near Fort Myers toward Fort Lauderdale and Miami, bypassing Naples and skirting the Everglades to the north.

The Fort Myers-Fort Lauderdale-Miami option, recommended by the University of Miami Center for Urban Studies, was not favored primarily by residents and business interests in Naples as well as by some transportation officials.7 Differing opinions, both economic and environmentally based, between the first two options also put the Florida Department of Transportation (FDOT) at odds with its own environmental study team in regards to the final path I-75 would take to cross the peninsula.7 Political controversy also surrounded the finalization of selecting either route as the primary corridor. By November 1971, however, the Federal Highway Administration (FHWA) chose the Alligator Alley corridor as the preferred route Interstate 75 would use to cross the Everglades.8 The southern route parallel to the Tamiami Trail was shelved due to the strong opposition and political concerns, as well as the costs to upgrade the East-West Expressway to Interstate standards.

Alligator Alley began its conversion to I-75 on July 7, 1986 with construction beginning on a 10.6 mile segment in Broward County.9 As part of the conversion, numerous wildlife underpasses and water vents were built to allow safe passage for free roaming animals and to uninhibit the natural flow of water through the Everglades ecostructure. The transition of the 78 mile Alligator Alley to Interstate 75 was complete by November 1992, and was also the last segment in completing the Sault Ste. Marie, Michigan to Miami freeway. Tolls were also proposed to be removed once the conversion was complete, but continuing maintenance of Alligator Alley requires the tolls to remain in place.

When I-75 was completed in Southeast Florida, the eight lane freeway opened up largely uninhabited farmland for development. Through the 1990s, the cities of Miramar, Pembroke Pines and Weston saw enormous population increase with the growth concentrated along the I-75 corridor. Between 1990 and 2000 the city of Pembroke Pines alone grew at a rate of 210 percent, from 65,452 to 137,427 residents. Traffic volumes have steadily increased along this stretch of Interstate 75, with traffic counts being as high as 163,084 between the Palmetto Expressway and Miramar Parkway (Exits 7AB).10

Express Lanes were constructed along 19 miles of Interstate 75 in Broward11 and Miami-Dade12 counties between SR 826 (Palmetto Expressway) and the I-595/SR 869 exchange. Completed by April 2018, the $780 million projects added over 30 miles of managed lanes with limited access points at key locations throughout the entire length. 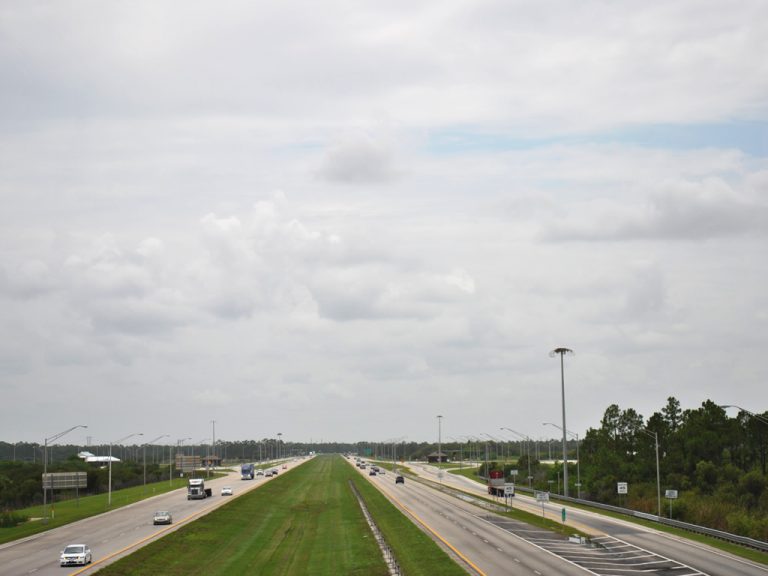 Scene looking south along Interstate 75 from the CR 768 (South Jones Loop Road) overpass prior to the widening project between Exits 158 and 161 in Charlotte County. 07/09/11

SR 93 is the state road counterpart for the majority of Interstate 75 in Florida, minus the portion between the I-275 tie ins at Palmetto and Wesley Chapel. State Road 93A follows I-75 along the Tampa bypass while SR 93 travels with I-275 through St. Petersburg and Tampa.

Much of the background information on I-75 in Florida was originally posted on TropicalTurnpikes.com and is reproduced with permission by Justin Cozart.