Interstate 85 constitutes a heavily traveled freeway through most of North Carolina. Entering the state from Upstate South Carolina, I-85 runs east from Kings Mountain to Gastonia and into the city of Charlotte. I-485 provides a bypass to the north while I-85 passes north of Downtown.

Turning northeast along a six to eight lane freeway, I-85 joins Charlotte with Concord, Kannapolis and Salisbury. A business loop for I-85 separated from the Interstate 85 at Lexington, joining U.S. 29/70 northeast into Thomasville and High Point while I-85 bypassed to the east. The loop is being retired from 2020 onward.

Continuing into the Piedmont Triad area, Interstate 85 enters the city of Greensboro along the southeastern quadrant of the freeway loop formed with I-73, I-840 and I-785. Interstate 40 runs across the city south of Downtown, combining with I-85 to the east.

I-40/85 overlap for 30.9 miles along an eight lane freeway to Burlington, Mebane and Hillsborough. They split west of Durham, with I-40 heading southeast to Chapel Hill and Raleigh and I-85 staying eastward into central Durham. Beyond the Bull City, Interstate 85 becomes more rural, reducing to four lanes and angling northeast to Oxford, Henderson and southeastern Virginia. 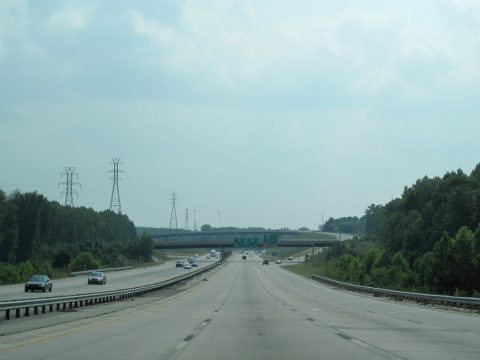 The wye interchange joining U.S. 70 west with I-85 south at Exit 178 was reconstructed as part of a $210 million widening project along I-85 west to U.S. 15-501 south. This included constructing new flyovers at Exit 178, which added eastbound access to U.S. 70 from I-85 south. All freeway lanes were opened to traffic in September 2006,2 but work involving side roads, ramps and landscaping continued to a ribbon cutting ceremony held on February 12, 2008.2

Dating back to 1955, the narrow four-lane bridge carrying Interstate 85 across the Yadkin River was replaced as part of a $201.5-million project that included rebuilding the interchange with NC 150. The northbound bridge opened on May 5 2012, followed by the new southbound span by March 9, 2013. Named the Yadkin River Veterans Memorial Bridge, the new twin spans included a 1.5 mile realignment of I-85 to the east of the original crossing. Interstate 85 accommodates four lanes per direction with 12 foot shoulders.4 Debate over the replacement of this bridge initially focused on construction of a toll bridge to pay for its cost. Discussion involved electronic toll collection at a rate as high as $4 per passenger vehicle.