Map of the westernmost eight counties in North Carolina. The 2004 proposal for Interstate 3 outlined a corridor between Knoxville, Tennessee and Augusta, Georgia. Plans called for the freeway to follow portions of NC 69, U.S. 64, and U.S. 129 through Clay, Cherokee and Graham Counties. Astronomical costs and environmental impacts have precluded this route from moving forward.

Bound by the state borders of Georgia, South Carolina, and Tennessee, Western North Carolina encompasses the high country of the Appalachian Mountains. Home to Great Smoky Mountains National Park and the Pisgah and Nantahala National Forests, this area of the state is home to a number of rustic towns, majestic peaks, and various lakes for boating enthusiasts. 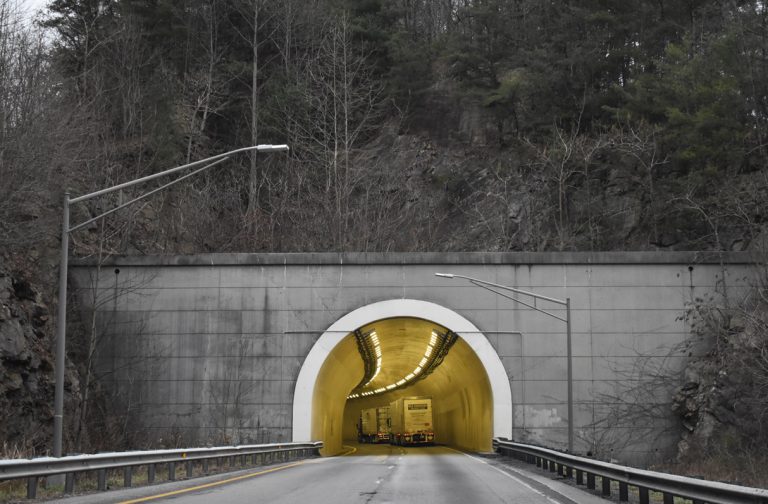 Interstate 40 is the main highway from Knoxville and eastern Tennessee to Asheville and the rest of North Carolina. The four-lane freeway cuts through the heart of Haywood County between Great Smoky Mountains National Park and Canton. Interchanges connect with local roads within the Pisgah National Forest, the Great Smoky Mountain Expressway near Waynesville, and at Canton. Interstate 40 travels just ten miles from the Haywood County line to the city of Asheville.

U.S. 74 enters the state of North Carolina paired with U.S. 64 from Isabella, Tennessee at the far western corner of the state. The U.S. routes overlap along a four-lane divided highway from there to Ranger, where they join U.S. 19/129. All four routes then travel northeast to Murphy, where U.S. 64 leaves for Hayesville. U.S. 19/74 continue with U.S. 129 to Andrews and Topton, where U.S. 129 departs for Sunteetlah Lake.

U.S. 74 lines three portions of the Great Smoky Mountains Expressway. The first segment bypasses Bryson City and Ela to the south of U.S. 19. The second segment carries U.S. 23/74 north of Sylva. The final segment includes overlaps with both U.S. 19/23 as it bypasses Waynesville between Hazelwood and Interstate 40. All Great Smoky Mountains Expressway segments are signed with exit numbers based upon U.S. 74’s mileage from the Tennessee state line.

U.S. 19 travels more east-west than north-south through western North Carolina. The U.S. highway flows northward out of the Atlanta metropolitan area into the North Georgia Mountains before crossing the state line along side U.S. 129 near Ranger. Four miles beyond the state line, U.S. 19/129 merge with U.S. 64/74 for a seven-mile overlap to Murphy. Once at Murphy, U.S. 19 Business loops into town and U.S. 64 leaves for Hayesville and Franklin. U.S. 19-29-129 continue 28 miles to Topton, where U.S. 129 departs for Robbinsville. A U.S. 19 Business loop serves the town of Andrews midway between Ranger and Topton.

Beyond the split with U.S. 129, U.S. 19/74 continue along a two-lane roadway through Nantahala, Wesser and the southern reaches of Fontana Lake. U.S. 19 partitions with U.S. 74 at the west end of the Great Smoky Mountain Expressway at Bryson City. The U.S. highway provides the main route through town en route to Ela, Birdtown and the resort town of Cherokee. Cherokee lies just south of Great Smoky Mountains National Park within the Cherokee Indian Reservation. U.S. 19 shares a short stretch with U.S. 441 through town before exiting onto winding path through Soco Gap to Maggie Valley. 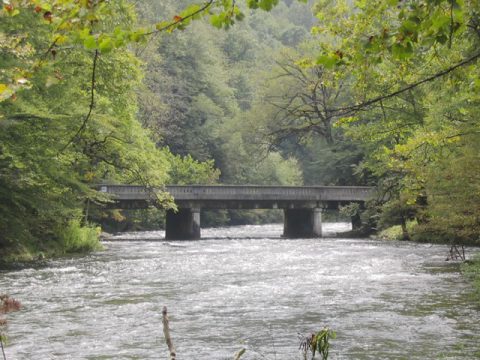 U.S. 19 continues east from Cherokee with two lanes along a winding course not recommended for trucks. The truck route for U.S. 19 circumvents this stretch south along U.S. 441 to U.S. 74 (Great Smokey Mountains Expressway) at Gateway, and east along U.S. 74 to Lake Junaluska.

Within the town of Maggie Valley U.S. 19 expands to four lanes leading east to U.S. 276 at Dellwood and Lake Junaluskae. A brief overlap along the Great Smoky Mountains Expressway takes U.S. 19 east alongside U.S. 23/74 to Clyde. U.S. 19/23 shift east from U.S. 74 to Canton while U.S. 74 continues north onto Interstate 40.

U.S. 23 is cosigned throughout its course through Western North Carolina. The route enters the state from Dillard, Georgia along side U.S. 441 via a four-lane divided highway. 14 miles north of the state line, the pair merge with U.S. 64 around the Macon County seat of Franklin. U.S. 23/441 share two miles with U.S. 64 before resuming a northward trajectory to Dillsboro and U.S. 74.

U.S. 64 comprises the longest route in the state of North Carolina. Traveling over 600 miles, U.S. 64 crosses the state from the Tennessee state line to Nags Head on the Outer Banks. Entering the Tarheel State with U.S. 74, U.S. 64 ventures 16 miles from Isabella, Tennessee to Ranger. Just east of there U.S. 64/74 join U.S. 29/129 for a seven mile drive to the Cherokee County seat of Murphy.

U.S. 64 leaves U.S. 29-74-129 at Murphy to skim the southern reaches of Clay, Macon, Jackson and Transylvania Counties. This includes a 2009-realignment from Murphy east to NC 141. The winding route travels to Hayesville, Chatuge Lake, Shooting Creek and Rainbow Springs on the route between Murphy and Franklin (U.S. 23/441). U.S. 64 merges briefly with U.S. 23/441 to bypass Franklin to the south. A U.S. 64 Business loop also serves Hayesville.

Once outside of Franklin, U.S. 64 reduces to two lanes and heads southeasterly again to Highlands along side NC 28. NC 28 departs there for Pine Mountain, Georgia as U.S. 64 turns back to the northeast to Cashiers, Sapphire and Cherryfield. U.S. 64 meets the northern terminus of U.S. 178 in central Transylvania County near the town of Rossman.

Nine miles separate U.S. 178 and the Transylvania County seat of Brevard along a four lane  stretch of U.S. 64. The highway, in conjunction with NC 280, provides a direct route to Interstate 26 and the Asheville metropolitan area to the northeast. U.S. 64 joins U.S. 276 for a three mile overlap between Downtown Brevard and NC 280 before turning eastward to Etowah and Hendersonville. Through Brevard, a U.S. 64 Truck route follows Caldwell Street one block north of U.S. 64 (Broad Street). A longer U.S. 64 Truck follows U.S. 74 and Interstate 40 between Hendersonville and Murphy.

U.S. 129 skims the western two counties of North Carolina between Ranger and Tapoco. The highway overlaps with U.S. 19 north from the Georgia line to U.S. 64/74 outside of Ranger. Turning northeast from there, U.S. 129 takes a divided highway with U.S. 19/74, 25 miles between Ranger and Andrews. Once at Topton, U.S. 129 leaves U.S. 19/74 to the northwest through the Sunteetlah Lake region en route to Maryville and Knoxville, Tennessee.

U.S. 178 extends just seven miles into the Tar Heel State. The US Route begins at U.S. 64 outside of Rossman and travels southward to Rocky Bottom and Pickens, South Carolina. The scenic two lane highway encircles Sassafras Mountain, the tallest peak in the Palmetto State.

Like U.S. 178, U.S. 276 is a Carolina-only U.S. route. U.S. 276 however is much shorter than U.S. 178, as it only travels between Greenville, South Carolina and Cove Creek, North Carolina. The route serves the growing northern suburbs of Greenville before ascending to Caesars Head, South Carolina and Cedar Mountain, North Carolina. Like U.S. 178 to the west, the route navigates through numerous switchbacks and sharp curves as it traverses the high country across the state line.

Including several switch backs and sharp curves, U.S. 276 winds through Pisgah National Forest on the 30 mile drive to Woodrow. Points of interest along the route include the natural attractions of Sliding Rock and Looking Glass Falls.

Once outside the Pisgah National Forest, U.S. 276 intersects the south end of NC 110 in Woodrow, and NC 215 north of Sunburst. A seven mile drive from there brings U.S. 276 to Downtown Waynesville and U.S. 23 Business (Main Street). U.S. 276 constitutes a four lane highway north from Waynesville to U.S. 19, where the two combine west for two miles. North from Dellwood, U.S. 276 enters its final extant between U.S. 19 and Interstate 40 at Cove Creek.

U.S. 441 enters North Carolina with U.S. 23 near Norton in southern Macon County as a four-lane divided highway. U.S. 23/441 combine from there 35 miles north to Dillsboro and the Great Smoky Mountain Expressway. The tandem bypasses Franklin along a two-mile overlap with U.S. 64 in central Macon County. U.S. 441 Business loops into Downtown Franklin north of the U.S. 23-64-441 bypass.

Outside of Sylva, U.S. 441 switches from the overlap with U.S. 23 to an overlap with U.S. 74. U.S. 74/441 wind eight miles northwest to the Bryson City segment of the Great Smoky Mountain Expressway at Exit 74. There U.S. 441 finally maintains its own routing to Cherokee. Through Cherokee, the highway splits between a business and bypass routing. U.S. 441 Business branches northeast to U.S. 19 at Cherokee. U.S. 441 Bypass stays west and joins U.S. 19 briefly before merging with U.S. 441 Business west of town.

U.S. 441 leaves Cherokee for Smokemont and Great Smoky Mountains National Park. Not open to commercial traffic, the US highway is the only to travel across the Great Smoky Mountains between North Carolina and Tennessee. The 25-mile drive between Smokemont and Gatlinburg, Tennessee features scenic views from the summit near the state line. Generally, the route geometry does not allow for high speeds.

15 state routes are signed throughout the western eight counties of North Carolina: