Updates and Road News for the week of February 1

Updates and Road News for the week of February 1

This week we finished adding photos taken last month in Upstate South Carolina and moved on from there to additional material sent in from Peter in the Green Bay area. Carter shot some of U.S. 123 between Easley and Greenville, so we coupled those photos with previous photos he took in April 2014 and from a drive Brent and I did back in December 2008 to three new pages. U.S. 123 is generally a locally traveled route from Westminster to Greenville, with a 1960s era freeway linking Clemson and Easley. The freeway sees a rural design with 65 mile per hour speed limits (up from 55 in 2008). Both directions are now documented on the site.

Shifting to the Badger State, updates yesterday and today include new pages for State Trunk Highway (STH) 29, 54 and 57. All highways travel statewide, but our coverage for now focuses on Brown County and Green Bay. More specifically Peter covered the Mason Street Bridge and associated freeway in Green Bay. Disconnected from the rest of the area freeway network, the elevated roadway includes interchanges on both sides of the Fox River as it joins neighborhood areas to the south of Downtown.

Since STH-54 overlaps with STH-57, I opted to post some photos from 2011 that Brent and I shot when we spurred north to collect Door County. STH-57 forms a 65-mph freeway/expressway from I-43 in Green Bay to the popular tourist destinations on the Door County peninsula. It provides a good example of the high quality expressway design you encounter across Wisconsin. As for Wis 29, posted photos include the trunk highway in both directions from I-41 at Howard to southeast Shawano County. Recent upgrades along this stretch include a new interchange with CTH-FF and a multi-level stack interchange with Interstate 41. Future updates for Wis 29 on the site may include the drive we took westbound in 2015 from Wausau to I-94 near Eau Claire. The mind-numbing aspect of the road from the unending agricultural landscape to the long straightaways may push that update further out.

With Flint, Michigan in the news lately for the water issues residents have been dealing with, it got me to thinking about our last visit there in 2009. I parlayed that into some updates to the Michigan Interstate guides, including some map scans and newer end photos for I-275, I-475 and I-696. The Toledo Blade archive on Google provided a bounty of articles for me to read through, so I also overhauled the history section for I-475 there, while extracting tidbits from the Detroit area including one of the reasons as to why I-275 north of Novi was cancelled.

Some news stories that piqued our interest this week include more on last week’s announcement pertaining to the end of Clearview font. This story on Jalopnik is one of the first I’ve read that goes into more detail as to why the FWHA dropped approval of the font. As the article points out, one of the biggest issues with Clearview was that the font was never intended for use with negative-contrast color schemes. Common examples include black on yellow placards with EXIT ONLY or black on white sign regulatory and toll schedule signs. 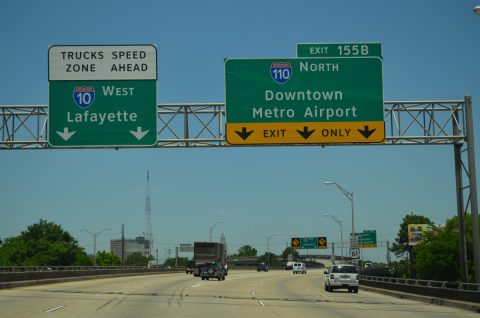 Two examples of improper reverse negative Clearview on these panels. A third error is the use of Clearview on the Interstate shield markers. All around poorly designed signs, with more examples appearing both in Baton Rouge and the New Orleans area.

The other big benefit contended by the font makers was that the typeface was more legible overall. Most uses of Clearview across the country include slightly larger font size than their Highway Gothic predecessors. Several instances however, especially in the Hampton Roads Virginia, failed to provide adequate margins between type and the border. 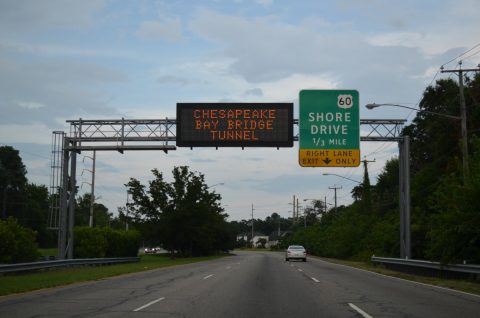 Clearview font use in the U.S. has until February 25, then new installations of it should eventually peter out.

A few other items from the forum and social media this week include the possibility of adding Express toll lanes to the Stevenson Expressway (Interstate 55) in the Chicago area. While area drivers are used to paying tolls thanks to regular increases along the Illinois Tollway system, the addition of managed lanes to a currently untolled road is something new. Toll lanes for I-55 still need legislative approval, but the Governor’s office is hopeful for a 2017 start to construction.

Speaking of public-private partnerships in managing roads, the ailing Indiana Toll Road will finally receive much needed attention when 73 miles are improved. Work on the stretch between Lake Station and Elkhart includes resurfacing, widening of shoulders, bridge repairs and the installation of fiber optic cables to improve traveler information. Construction runs through December 2017.

The new Interstate watch includes the designation of U.S. 70 from Raleigh to Morehead City as a future Interstate corridor. Kentucky also proposes redesignating the William H. Natcher Parkway as Interstate 565. The 2016-22 Recommended Highway Plan allocates $66 million to bring the parkway to Interstate standards.