SR 9 straddles coastal areas of Delaware Bay northward from Dover Air Force Base and Little Creek to Taylors Bridge in New Castle County. The state route meanders northeast to eventually run alongside the Delaware River through Port Penn. Spanning the Chesapeake and Delaware Canal across the Reedy Point Bridge into Delaware City, SR 9 transitions to a suburban route south of New Castle, and an urban arterial north from the historic town to the city of Wilmington. 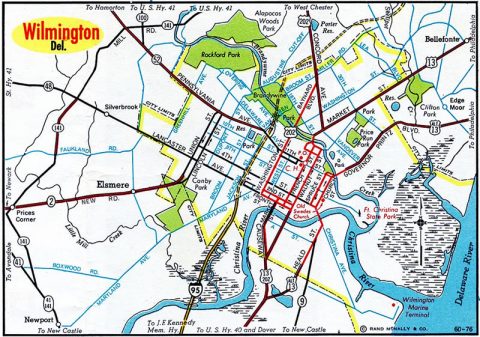 4th Street west from U.S. 13 Alternate was unnumbered until the 1970 extension of SR 9 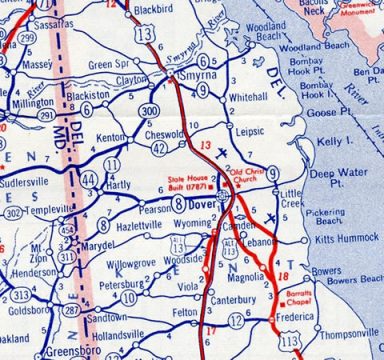 The extension of SR 9 north to Wilmington appeared on the 1959-60 Official Delaware Highway Map. Reedy Point Bridge, a high level, continuous steel thru truss bridge across the Chesapeake and Delaware Canal, opened to traffic at Delaware City in 1968. Through the city of New Castle, SR 9 followed 7th Street, South Street and 9th Street just outside the historic district. It followed New Castle Avenue north to end at U.S. 13 Alternate (Heald Street), one block north of A Street.

An array of numbering changes were made in the city of Wilmington in 1970. U.S. 13 shifted east over what was U.S. 13 Alternate, while the former alignment was reassigned as U.S. 13 Business. This coincided with the addition of SR 9 west along 4th Street, from an overlap with U.S. 13 across the Christina River, to SR 2 (Lincoln and Union Streets). SR 9A was also designated at this time along Christina Avenue through Southbridge.

One final change to the alignment of SR 9 occurred by 1987. Through New Castle, SR 9 was rerouted onto Washington Street northwest to SR 141 (Basin Road), and east alongside SR 273 on Delaware and Chestnut Streets back to 6th Street. The new route was made to divert truck traffic. The SR 273 overlap remained in place until 2012, when a new end shield for the multi state route was posted at Basin Road. The previous end assembly however was still posted in 2017.

SR 9 begins at a diamond interchange with SR 1 (former U.S. 113) along the Dover city line south of Dover A.F.B. The state route encircles eastern reaches of the military base to Little Creek. SR 8 (North Little Creek Road) ties into SR 9 (Main Street) at the north end of town, as Bayside Drive resumes through agricultural areas. The state route advances 6.4 miles north to SR 42 in the small town of Leipsic.

SR 9 bypasses Dover to the east by Little Creek State Wildlife Area and through the town of Little Creek.

Flemings Landing Road takes SR 9 north across Thoroughfare Neck and to the west of Cedar Swamp Wildlife Management Area to the settlement of Taylors Bridge. Taylors Bridge Road curves SR 9 west across Blackbird Creek and north to Stumps Corner. The Odessa National golf course community spreads west of the state route along Fieldsboro Road, while Odessa Chase and Cantwell Ridge were built to the east of the SR 9 intersection with SR 299 at Mathews Corners.

River Road mirrors the course of the Delaware River northeast by Bayview Manor, Llangollen Estates and several other subdivisions. An industrial area precedes a low lying stretch across Army Creek, which brings SR 9 onto 7th Street into the city of New Castle. Washington Street angles SR 9 northwest to the joint termini of SR 141 (Basin Road) and SR 273 (Frenchtown Road). Delaware Street turns SR 9 east back to its former alignment on 6th Street.

SR 9 expands into an older four-lane arterial along Wilmington Road through north New Castle. Beyond the city line, Delaware follows New Castle Avenue and continues north to I-295/U.S. 40 at the Delaware Memorial Bridge, and SR 9A (Terminal Avenue) by the Port of Wilmington. The state route enters Wilmington at the Southbridge community, where it separates into a one-way couplet with U.S. 13 on New Castle Avenue north and Heald Street south.

The one-way couplet of U.S. 13/SR 9 combines north of Lobdell Street and ahead of SR 9A (Christina Avenue) and the Heald Street Bridge across the Christina River. SR 9 (4th Street) splits with U.S. 13 at the East Side neighborhood and continues west by Downtown to the Hilltop and Flats communities.

The Wilmington Area Planning Council (WILMAPCO) endorsed the Route 9 Corridor Master Plan in May 2017. The plan outlines road diets along two sections of SR 9, reconfiguring the interchange with Interstate 295 and several other intersections, and adding roundabouts at SR 9A (Terminal Avenue), Cherry Lane and Memorial Drive.