The city of Reno is the “Biggest Little City in the World.” The Downtown city scape includes towering hotels and casinos. With gambling a huge part of the local economy, many travelers from Northern California visit Reno for the nightlife, entertainment, gambling and fine dining.

Reno sits at an elevation of 4,505 feet above sea level. The city is located within Truckee Meadows, a valley it shares with Sparks, along the banks of the Truckee River. Due to its position east of the Sierra Nevada and within the rain shadow, Reno only sees an average annual precipitation (rain and snow) of 7.48 inches, which is quite a bit less than seen in California’s Central Valley on the west side of the same mountain chain. 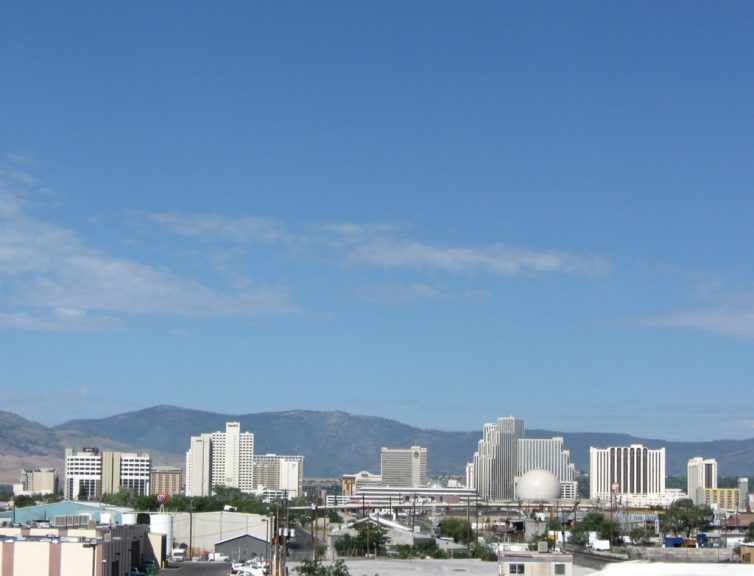 The Downtown Reno skyline, looking west from U.S. 395, includes the distinctive Silver Legacy dome and several high rise towers, many of which are hotels and resorts. Photo taken 07/19/09.

Companion city of Sparks lies adjacent to Reno east of U.S. 395 and north of the Truckee River. Like Reno, Sparks saw growth due to the explosion in the gambling industry through the 20th century as well as its position along the Union Pacific Railroad. As of the 2010 Census, Sparks had a population of 90,264, an increase from 66,346 recording in the the 2000 Census.

Known as the “City of Promise,” Sparks sits at an elevation of 4,410 feet above sea level. The city was named in 1904 for former Governor John Sparks. It incorporated on March 15, 1905.

Sparks’s tallest casino is the Nugget, built in 1984 and located in Downtown. The Union Pacific Railroad switch yard sits on the south side of Interstate 80 near the interchange with Pyramid Way (Nevada 445). 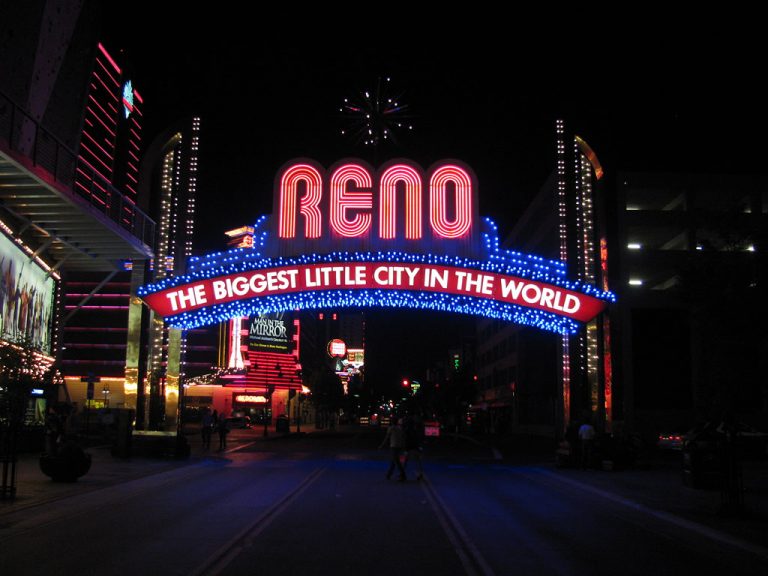 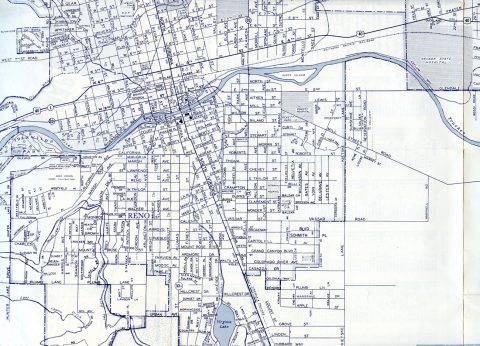 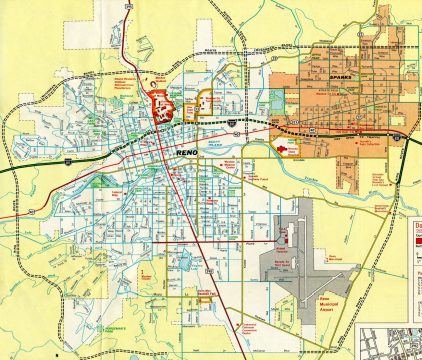 Interstate 80 replaced U.S. 40 as the main east-west route through the Truckee Meadows. The freeway travels east from Verdi and the master planned Somersett community with four lanes through the Mogal area of west Reno. With increasing traffic, I-80 expands to five lanes plus an auxiliary lane from Robb Drive (Exit 9) east to McCarran Boulevard (SR 659). Eastbound traffic remains with just two through lanes until the SPUI (Exit 12) with Keystone Avenue (Business Loop I-80).

A lid hosts a Walgreens pharmacy on the block between Virginia Street (U.S. 395 Business) and Center Street above a seven lane section of Interstate 80. Staying below grade, I-80 advances east to meet Interstate 580 & U.S. 395 south to Carson City and the U.S. 395 freeway north to Silver Lake in north Reno and Bordertown along the California state line.

Through Sparks, Interstate 80 parallels the Union Pacific Railroad line with six overall lanes east to the SPUI (Exit 18) with SR 445 (Pyramid Way). Separating industrial areas to the south with the adjacent commercial strip along Business Loop I-80 (Victorian Avenue), I-80 reduces to four lanes plus auxiliary lanes to the McCarran Boulevard at Exit 19, and by Sparks Marina Park. The northeast Truckee Meadows is home to the Outlets at Sparks retail complex, Wild Island Family Adventure Park and an array of warehouses, distribution centers and trucking companies. Interstate 80 leaves the built up areas of east Sparks for a rural course along the Truckee River east to Mustang, Patrick and the Tahoe Reno Industrial Center off USA Parkway (SR 439) south.

The primary freeway route through Reno-Sparks is Interstate 580 and U.S. 395, which bypasses old U.S. 395 along Virginia Street and stays to the east of Downtown Reno. The Interstate 580 Freeway Extension Project, which connected disparate segments of U.S. 395 freeway near Washoe Lake and Mt. Rose Junction (bypassing Pleasant Valley), was completed in August 2012. As of August 2, 2017, Interstate 580 was fully opened from Interstate 80 at Reno southward to the separation of U.S. 50 west and 395 south in Carson City. The section of Interstate 580 and U.S. 395 through the city of Reno is named the Martin Luther King, Jr. Memorial Highway, with the older portions originally called the North-South Freeway.

South from Carson City through Minden, U.S. 395 is the primary route through the Eastern Sierra. Part of a 1,305 mile long route that spans four states, U.S. 395 is the Three Flags Highway. Entering Nevada at Topaz Lake, U.S. 395 turns northwest by the Pine Nut Mountains to enter Carson Valley ahead of Gardnerville. Overtaking MSR 88 north from Alpine County, California, U.S. 395 proceeds due north to cross the Carson River ahead of Eagle Valley and the state capital of Carson City. U.S. 395 accompanies U.S. 50 along the Carson City Freeway (I-580) to bypass Downtown, with U.S. 395 Business following the former route along Carson Street.

U.S. 50 splits with I-580 & U.S. 395 at William Street to the continuation east to Fallon. North from there, the freeway proceeds past Washoe Lake and Mt. Rose Junction before entering Truckee Meadows and the Reno-Sparks metropolitan area. Traveling north into Reno, Interstate 580 and U.S. 395 have direct connections with Reno-Tahoe International Airport (RNO).

I-580 ends at Interstate 80 (Exit 68). U.S. 395 continues northwest, aiming back into California at Bordertown as a full freeway. U.S. 395 will travel as a freeway or expressway northward to Susanville.

Business Loop I-80 follows Historic U.S. 40 along Fourth Street in Reno and Victorian Avenue in Sparks. The entire 5.2 mile route, with the exception of a 0.176 mile segment through the diamond interchange (Exit 16) with I-80, is locally maintained, with former NDOT sections previously designated as Nevada 647. Nevada 647 remains in the state system along 3.22 miles of 4th Street, west of McCarran Boulevard (Nevada 659) to I-80 at Exit 8.

Beginning at the SPUI (Exit 12) with Keystone Avenue in the West University area of Reno, Business Loop I-80 branches south from I-80 to connect with 4th Street east to the Reno central business district. 4th Street and Virginia Street meet in the heart of Downtown, representing the former crossroads of U.S. 40 and U.S. 395. Paralleling the Union Pacific Railroad eastward, Business Loop I-80 passes below I-580 & U.S. 395 and enters the city of Sparks, where 4th Street becomes Prater Way.

Victorian Avenue leads the business route east along the north side of Interstate 80 from Kietzke Lane (old SR 667) along a commercial strip through to SR 659 (McCarran Boulevard). Business Loop I-80 rejoins I-80 at the parclo interchange (Exit 19) with McCarran Boulevard. As of July 2017, only four reassurance markers remained posted for Business Loop I-80 in Reno and Sparks. 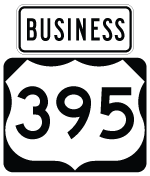 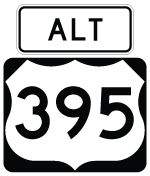 U.S. 395 Business follows the pre-freeway alignment of U.S. 395 along Virginia Street from Exit 61 in south Reno north through Downtown to Exit 72 at Panther Valley. Only the northern 3.161 miles of U.S. 395 Business are state maintained as Nevada 430. The rest is under local control.

Until 2012, U.S. 395 Business ended at Mt. Rose Junction, where it met SR 431 (Geiger Grade Road) east and SR 341 (Mt. Rose Highway) west. The portion of Virginia Street north from Mt. Rose Junction to Patriot Boulevard, where Interstate 580 & U.S. 395 cross from the west to the east en route to Reno Tahoe International Airport (RNO), is now a part of NDOT-maintained U.S. 395 Alternate. This maintenance change took place with the completion of I-580 south through the Washoe Valley in August 2012.

U.S. 395 Alternate replaced the surface route of U.S. 395 south from Reno through Steamboat, Pleasant Valley and Washoe City. The route loops west of I-580 through the western Washoe Valley to Franktown along what was SR 429. The 20.08-mile long highway ends at the Eastlake Boulevard interchange (Exit 44) with Interstate 580 & U.S. 395.

The first section of the North-South Freeway was completed in 1970. U.S. 395 officially relocated from Virginia Street to the adjacent freeway as approved by AASHTO on June 20, 1972.

Nevada 341 loops southeast from U.S. 395 Alternate and Nevada 431 at Mt. Rose Junction to Virginia City in Storey County and U.S. 50 near Mound House. The state route connects south Reno with the suburb of Virginia Foothills before winding across the Virginia Range to Geiger Summit (el. 6,820) feet and the Virginia Highlands community.

Business Loop I-80 through Verdi is state maintained and designated Nevada 425. The 3.437 mile loop follows 3rd Street from Exit 2 through the community of Verdi, and old U.S. 40 from there back to I-80 (Exit 5) by Mogul in west Reno.

Nevada 443 spurs 3.197 miles north from Nevada 659 (McCarran Boulevard) into the community of Sun Valley. The southern leg of the route arcs northeast from an interchange with the U.S. 395 freeway around the Meadow View Terrace and Scenic Terrace subdivisions to Dandini Boulevard. The undivided four-lane arterial becomes Sun Valley Boulevard north from there to Sun Valley Community Park and 7th Avenue, where Nevada 443 ends.

Proposed in 2006, the Pyramid-McCarran Intersection Improvement Project addresses congestion at the intersection of SR 445 (Pyramid Way) and SR 659 (McCarran Boulevard). Costing $72 million overall, the expansion work got underway with the demolition of houses in December 2014. In all 71 buildings, 69 of which were homes, were razed to make way for an added lane in each direction of Pyramid Way, dedicated turn lanes for both state routes, a new multi-use path along the east side of SR 445 and sidewalk construction.1 Work runs through spring 2018. 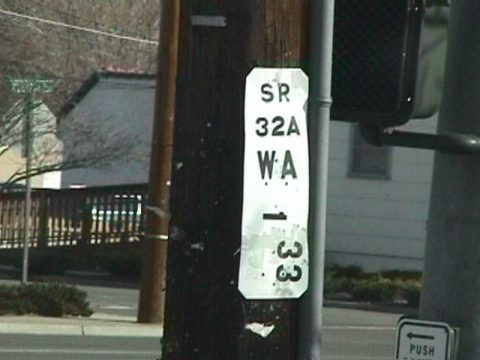 Prater Way through Sparks was formerly a state route. The east-west boulevard was initially designated as Nevada 32A, then changed to Nevada 646 in 1976 during the statewide renumbering. The state-maintained designation was gradually reduced until it only included a very small segment of Prater Way adjacent to the intersection with East McCarran Boulevard (Nevada 559). By 2011, the remainder of Nevada 646 was decommissioned.

SR 648 overlays 2.66 miles of 2nd Street in Reno and Glendale Avenue in Sparks. The state route originates at SR 667 (Kietzke Lane) just ahead of a parclo interchange (Exit 67) with I-580 & U.S. 395. East across the Truckee River at Fishermans Park, SR 648 enters Sparks and continues into an industrial area through to its end at SR 659 (McCarran Boulevard).

Plumb Lane constitutes an east-west commercial arterial from Arlington Avenue to the passenger terminal of Reno-Tahoe International Airport (RNO). The eastern 0.589 miles, from SR 667 (Kietzke Lane) to the SPUI with I-580 & U.S. 395 and Terminal Way is signed as SR 653.

SR 655 spurs south from Interstate 80 near Patrick along Waltham Way. The 1.142 mile route connects the freeway at Exit 28 with an industrial park across the Truckee River in north Storey County.

Nevada 659 is the designation for the at-grade beltway encircling the Reno-Sparks metropolitan area. Known primarily as McCarran Boulevard; its state route number is rarely used by the traveling public. This busy route is currently maintained entirely by NDOT; prior to 2009, portions of the loop route were locally maintained. Nevada 659 totals 22.97 miles in length.

Nevada 667 overlays a 3.84 mile section of Kietzke Lane north from U.S. 395 Business (Virginia Street) in Reno. The five-lane commercial boulevard parallels I-580 & U.S. 395 to the west through to Nevada 648 (2nd Street). A median separates traffic along the northernmost extent curving Kietzke Lane across the Truckee River. Nevada 667 ends at Galletti Way and the Sparks city line, but formerly extended east to Business Loop I-80 (Victorian Avenue).

Rock Boulevard leads north from industrial areas of Sparks south of the Union Pacific Railroad to the residential street grid north of Interstate 80. A 0.395 mile section of the four-lane arterial, from Hymer Avenue north to the ramps with I-80 at Exit 17 and Victorian Avenue (Business Loop I-80) is unsigned Nevada 668.

Nevada 880 represents the remaining segment of old Nevada 33 still within the state system. Nevada 33 turned west from Pyramid Way (then-Nevada 32) and followed all of Wedekind Road through to Sutro Street. Sutro Street linked Nevada 33 with Wells Avenue west and south around the Washoe County Fair Grounds to its end at Interstate 80.