Through Chester County, U.S. 1 follows the Kennett Oxford Bypass, a freeway arcs northeast around the boroughs of Oxford, West Grove, Avondale and Kennett Square. The former alignment is Baltimore Pike, which U.S. 1 overtakes east from East Marlborough township to Pennsbury and the Delaware County line.

Within Delaware County, U.S. 1 continues along Baltimore Pike to Chadds Ford and U.S. 202/322 at Painters Crossroads. U.S. 322 overlaps with U.S. 1 for one mile to Conchester Highway en route to Chester. U.S. 1 stays to the north from Concordville to the borough of Chester Heights along a suburban arterial to Granite Run Mall at Lima.

The Roosevelt Expressway heads northeast between the East Falls, Nicetown and Germantown neighborhoods in Philadelphia to U.S. 13 at Hunting Park. U.S. 1/13 overlap along Roosevelt Boulevard, an urban arterial with four roadways. U.S. 13 branches east from U.S. 1 at Robbins and Levick Streets near Mayfair. U.S. 1 continues to Northeast Philadelphia to Bustleton, Normandy where it overlaps with PA 63, and Byberry at Benjamin Rush State Park.

Leaving Philadelphia, U.S. 1 upgrades to a freeway across southern Bucks County. U.S. 1 arcs northeast from Ben Salem township and the Pennsylvania Turnpike (I-276) to Langhorne, Oxford Valley and Morrisville. The bridge into New Jersey is tolled in the southbound direction. 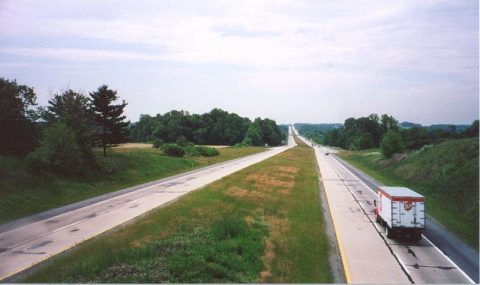 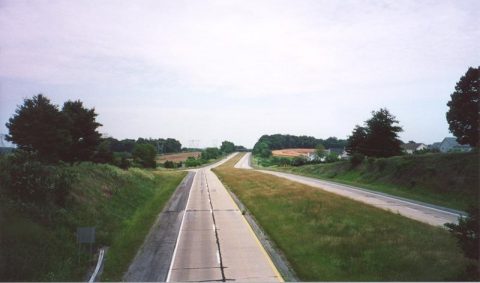 The initial portion of the Kennett Oxford Bypass opened to traffic between PA 41 in London Grove township and Baltimore Pike northeast of Kennett Square. The realignment of U.S. 1 onto the short freeway was approved by the American Association of State Highway Officials (AASHO) on July 5, 1966. The remaining 16.05 miles of the bypass southwest to the Maryland state line was approved as the new alignment of U.S. 1by AASHO on November 7, 1970.

The Media Bypass was completed in 1959. U.S. 1 was realigned northward from Baltimore Pike through Media onto the freeway from PA 352 at Black Horse to PA 320 near Marple. Additionally U.S. 1 Bypass, which ran along PA 320 north from Baltimore Pike at Swarthmore to the Media Bypass, and along State Road and Township Line Road east to Philadelphia, was decommissioned. AASHO approved the realignment of U.S. 1 along the Media Bypass and over former U.S. 1 Bypass from Springfield township northeast on October 10, 1959.

The limited access highway along U.S. 1 between Langhorne and Langhorne Manor east to U.S. 13 near Morrisville was completed in 1986. The American Association of State Highway and Transportation Officials (AASHTO) approved the relocation of U.S. 1 onto the bypass on October 8, 1986. Further east at the Delaware River, U.S. 1 moved southward from the Lower Trenton Bridge and Bridge Street through Morrisville onto the Trenton Morrisville Toll Bridge and connecting freeway. Signing work for U.S. 1 along the four lane highway and U.S. 1 Alternate on the former route in Bucks County was completed on January 4, 1954. Previous requests to AASHO from the Pennsylvania Department of Highways to both relocate U.S. 1 and establish U.S. 1 Alternate dated back to November 26, 1952.