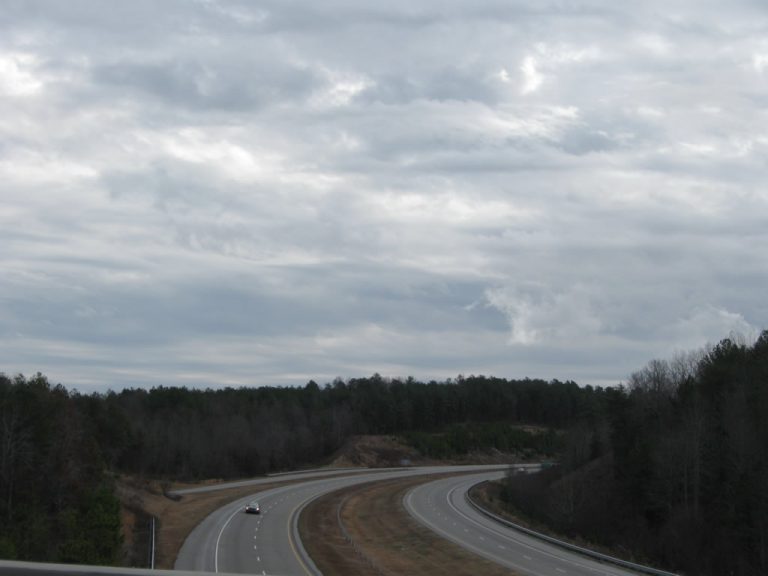 U.S. 74 is a major highway that traverses the width of North Carolina. Many sections of U.S. 74 were upgraded to limited access standards, some of which are incorporated in the Interstate 74 corridor from Rockingham to Wilmington. The US highway concludes in Wrightsville Beach at a cul-de-sac, over 400 miles from the point where U.S. 74 enters the Tarheel State from neighboring Tennessee.

A $19 million project expanded the interchange joining the U.S. 74 freeway around Columbus with Interstate 26 in Polk County. Direct ramps were constructed from U.S. 74 west to I-26 east and from I-26 west to U.S. 74 east. These allow motorists to avoid the adjacent I-26 dog bone interchange with Mills Street, which previously provided part of the connection between the two freeways. Construction ran from late October 2017 to August 17, 2018.1

Through Cleveland County, long term construction on the U.S. 74 Shelby Bypass realigns U.S. 74 onto an Interstate-standard freeway around Shelby. Split into six sections and costing $284 million, the 18.5-mile long highway bypasses Shelby to the north, extending east from near Peachtree Road to U.S. 74 Business in Kings Mountain:

Through Charlotte in Mecklenburg County, $101.2 million in right of way and construction converted a 1.6-mile section of U.S. 74 along Independence Boulevard into a limited access highway. Work underway from April 2013 to Fall 2017 upgraded Independence Boulevard southeast from N.C. 24/27 (Albemarle Road) to a point east of Wallace Lane. Interchanges were built at Sharon Amity Road and Idlewild Roads and Conference Drive was elevated to cross U.S. 74 on a new overpass.

Further southeast along U.S. 74, the Monroe Expressway (U.S. 74 Bypass) is a toll road allowing through traffic to bypass Monroe and Wingate from Interstate 485 to Marshville. Partitioned into six sections, work started on the nearly 18.5-mile long expressway ran from May 2015 to November 2018. Opened on November 27, 2018, the toll road is operated by the North Carolina Turnpike Authority.

U.S. 74 at Wilmington was rerouted from an overlap with U.S. 17/76 through Downtown onto the Isabel Holmes Bridge (Parsley Street Bridge) when the Martin Luther King, Jr. Parkway was completed in September 2005. The parkway comprises a controlled-access route from N 3rd Street east to U.S. 17 Business (Market Street) at Eastwood Road, U.S. 74's original alignment toward Wrightsville Beach. The realignment between U.S. 17-76-421/N.C. 133 and U.S. 17 in Wilmington was approved by the American Association of State Highway and Transportation Officials (AASHTO) on May 6, 2005.