U.S. 322 travels across the width of the Keystone State from the Ohio line by the Pymatuning Reservoir to the Commodore Barry Bridge spanning the Delaware River into New Jersey.

The initial 17.3 mile stretch circumvents Pymatuning Reservoir south to Jamestown and northeast to U.S. 6 at the borough of Conneaut Lake. U.S. 6/322 overlap east 5.5 miles to a roundabout with U.S. 19 in Vernon township. Three routes combine 3.0 miles east to Interstate 79 and the city of Meadville.

U.S. 322 continues along the remainder of the Mt. Nittany Expressway 5.6 miles from Interstate 99 to U.S. 322 Business at Boalsburg. A two to three lane stretch leads U.S. 322 east 7.3 miles into Potter township, where the Potters Mills Gap (PMG) Transportation Project upgraded the route into a limited access highway:

U.S. 322 crosses into Mifflin County south ahead of Long Mountain, Front Mountain and Spruce Mountain. Following a freeway, U.S. 322 advances south to Milroy and the Kishacoquillas Valley and Mann Narrows across Jacks Mountain. U.S. 322 combines with U.S. 22/522 outside Lewistown, 13.0 miles south of the Sand Mountain Road Interchange at Faust Flat. U.S. 522 separates with U.S. 22/322 after a 0.9 mile overlap to Walnut Street.

U.S. 22/322 continue southeast along a freeway 41.0 miles from the split with U.S. 522 at Lewistown to U.S. 11/15 near Amity Hall. The two routes downgrade onto an arterial 1.4 miles south in Reed township to PA 849 west into Duncannon. Crossing the Clarks Ferry Bridge over the Susquehanna River, U.S. 22/322 again follow a freeway for 11.9 miles south to Interstate 81 in north Harrisburg.

U.S. 22 spurs south from I-81 onto Cameron Street while U.S. 322 bypasses the capital city alongside I-81 east for 2.6 miles and I-83 south for 3.4 miles to Eisenhower Boulevard. Eisenhower Boulevard links U.S. 322 with a freeway extending east from the Eisenhower Interchange joining I-83/283 along Paxton Street 0.6 miles to the south. U.S. 322 proceeds 7.0 miles east from I-83 at Oakleigh to the split with U.S. 422 between Hummelstown and Hershey.

Through Southeastern Pennsylvania, U.S. 322 travels 67.3 miles from U.S. 422 near Hershey to U.S. 202 outside West Chester. Joining Brickerville, Ephrata, Honey Brook and Downingtown, this stretch of U.S. 322 includes an expressway bypass of Cornwall.

U.S. 202/322 bypass the borough of West Chester along an expressway to the east while U.S. 322 Business connects the two routes with Downtown and West Chester University of Pennsylvania. U.S. 202/322 overlap south 7.6 miles to U.S. 1 near Chadds Ford, where U.S. 322 turns east along a commercialized stretch with U.S. 1 one mile to Concordville.

Future work will reconstruct and make improvements at the exchange joining Interstate 95 and U.S. 322 when funds become available. I-95/U.S. 322 overlap for eight tenths of a mile east to the elevated freeway taking U.S. 322 south onto the Commodore Barry Bridge. U.S. 322 enters the Garden State 1.6 miles south from Interstate 95.

The Commodore John Barry Bridge crosses the Delaware River between Chester, Pennsylvania and Bridgeport, New Jersey. Operated by the Delaware River Port Authority (DRPA), tolls are collected along the Commodore Barry Bridge westbound. The cantilever span opened to traffic on February 1, 1974 after nearly five years of construction.1 Upon completion, the bridge replaced ferry service between the two states for U.S. 322.2 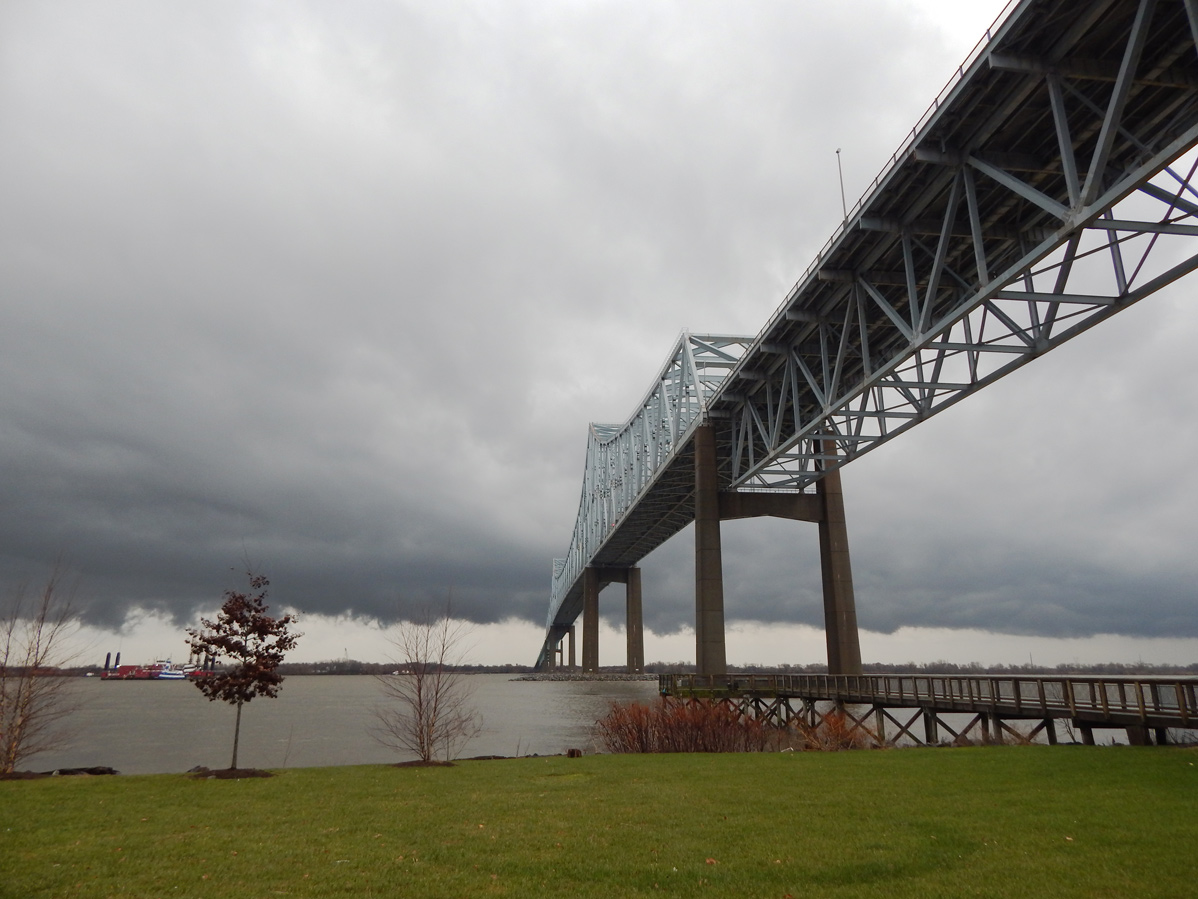 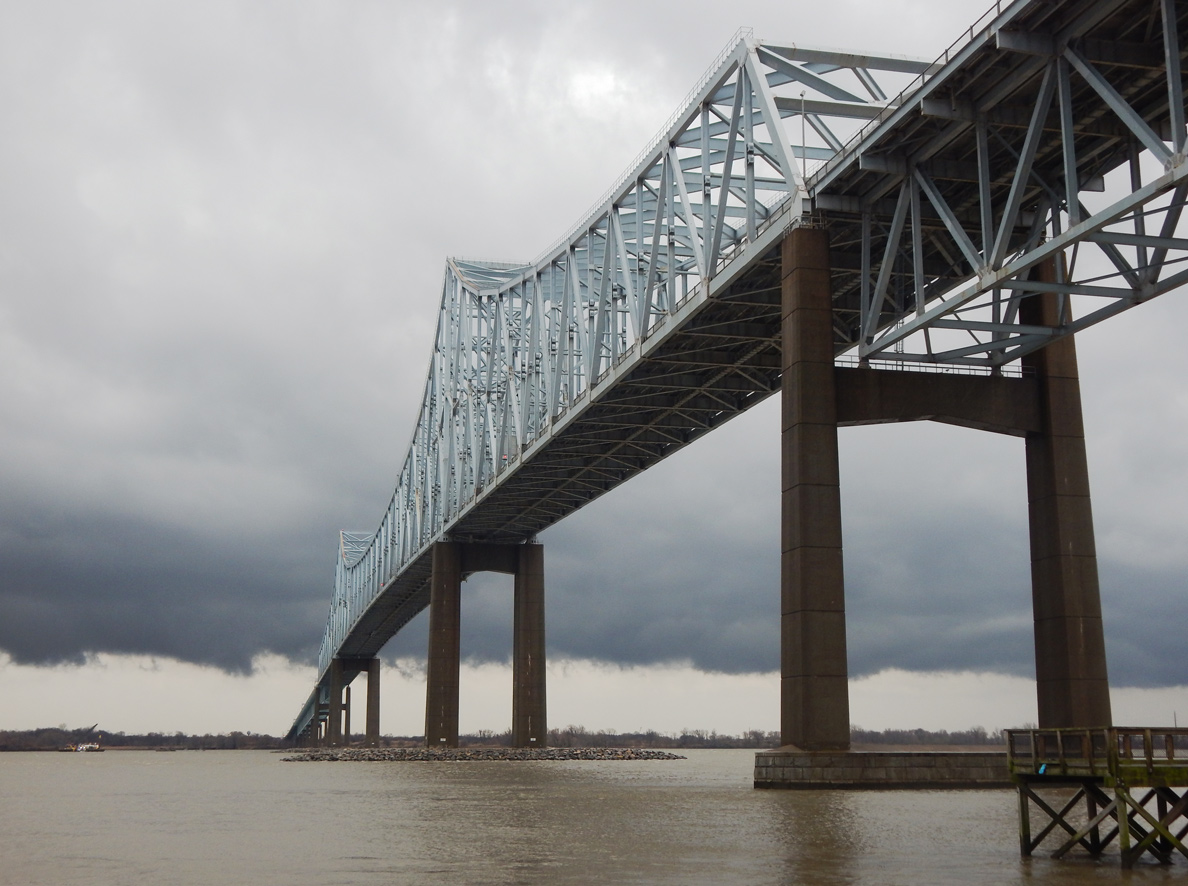 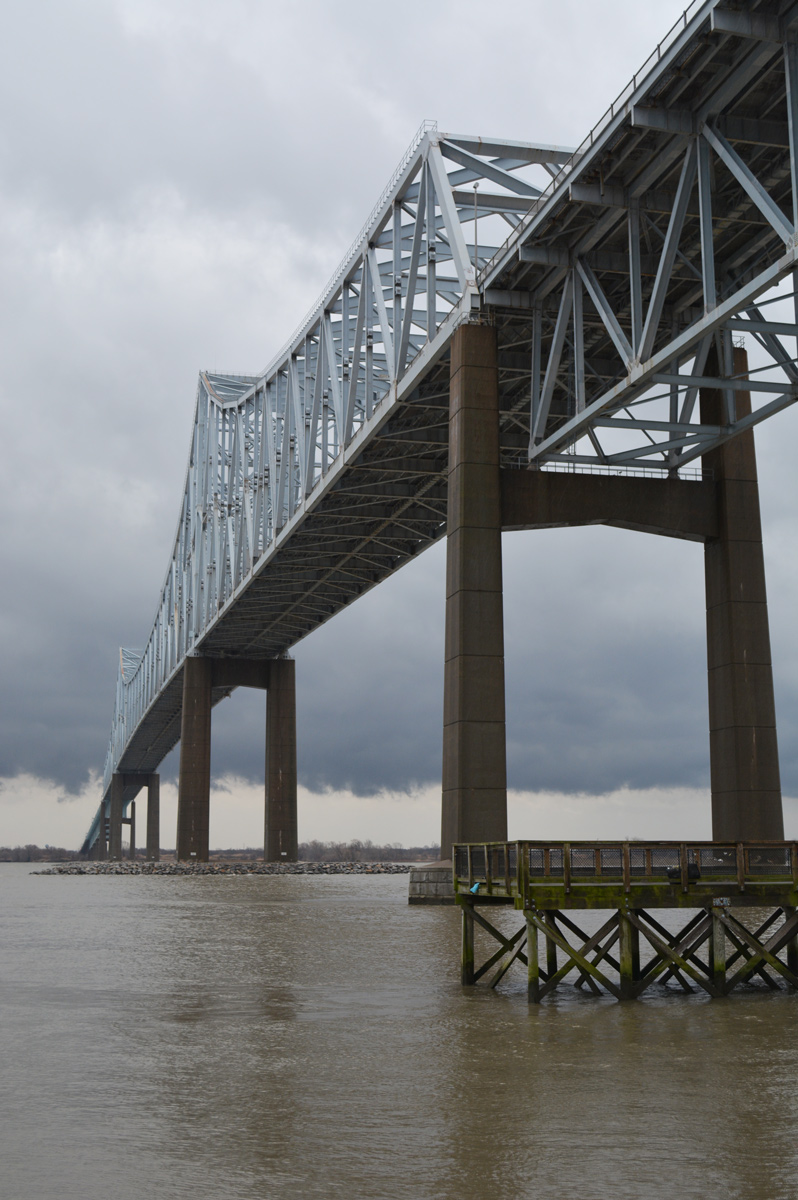 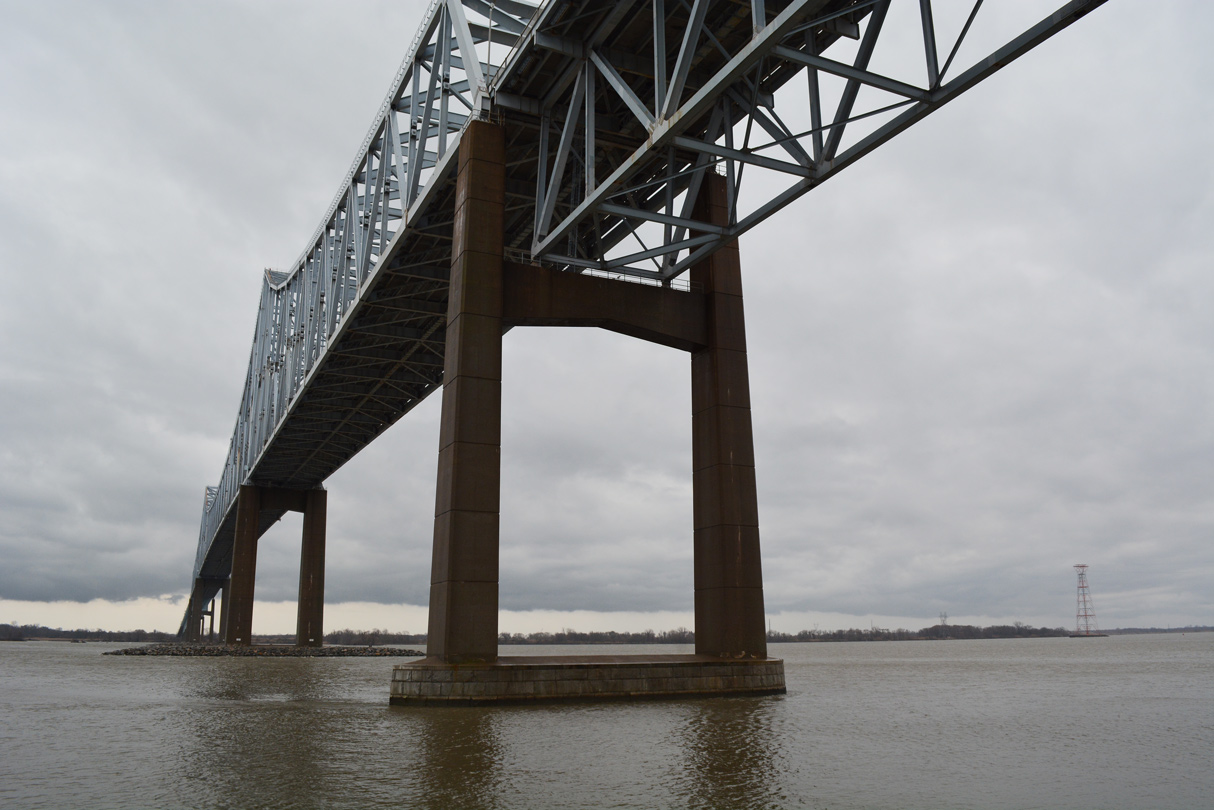 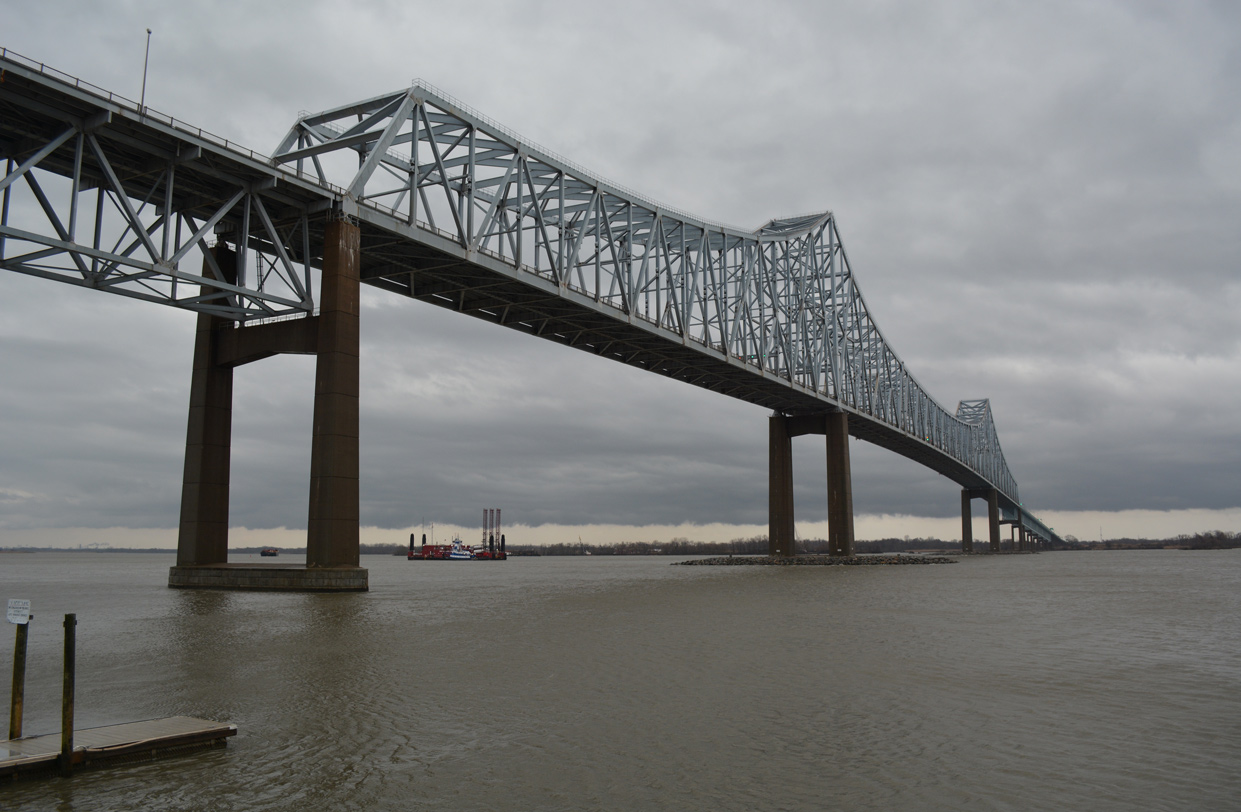 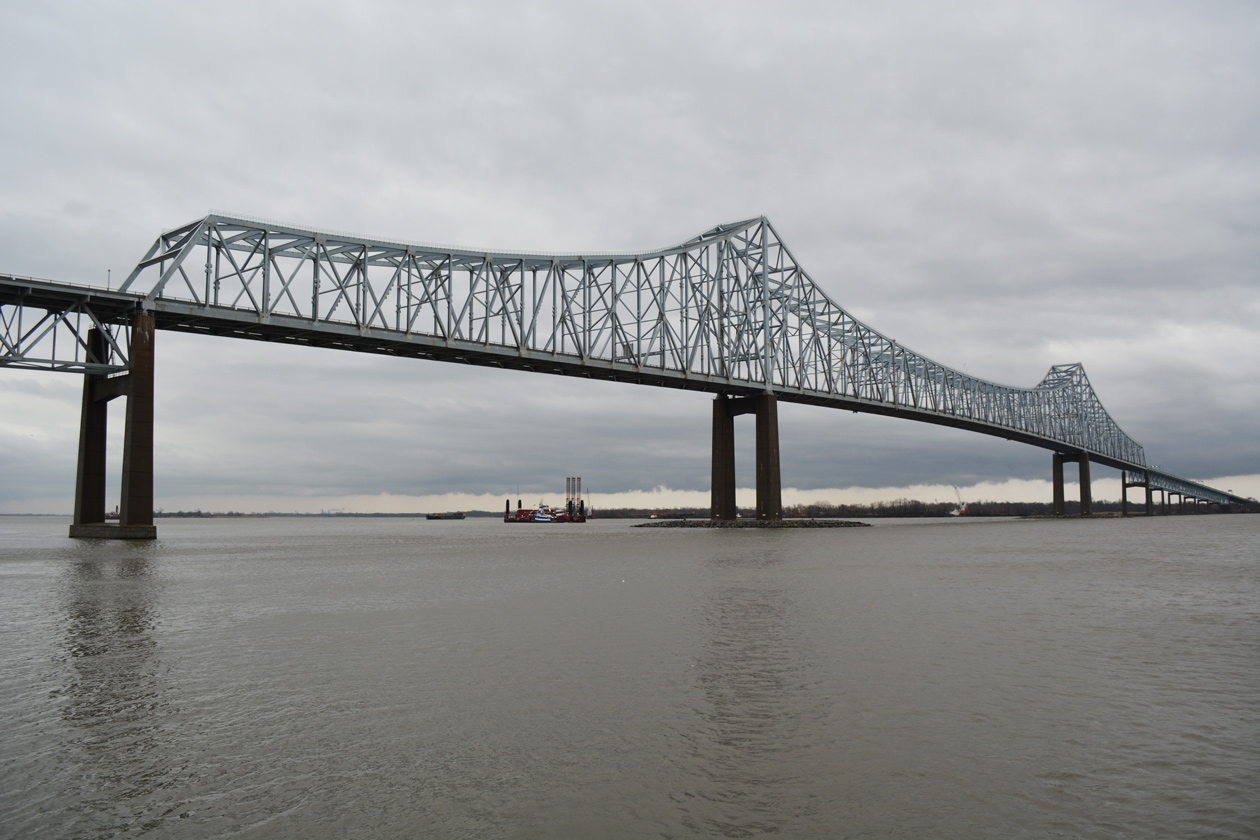 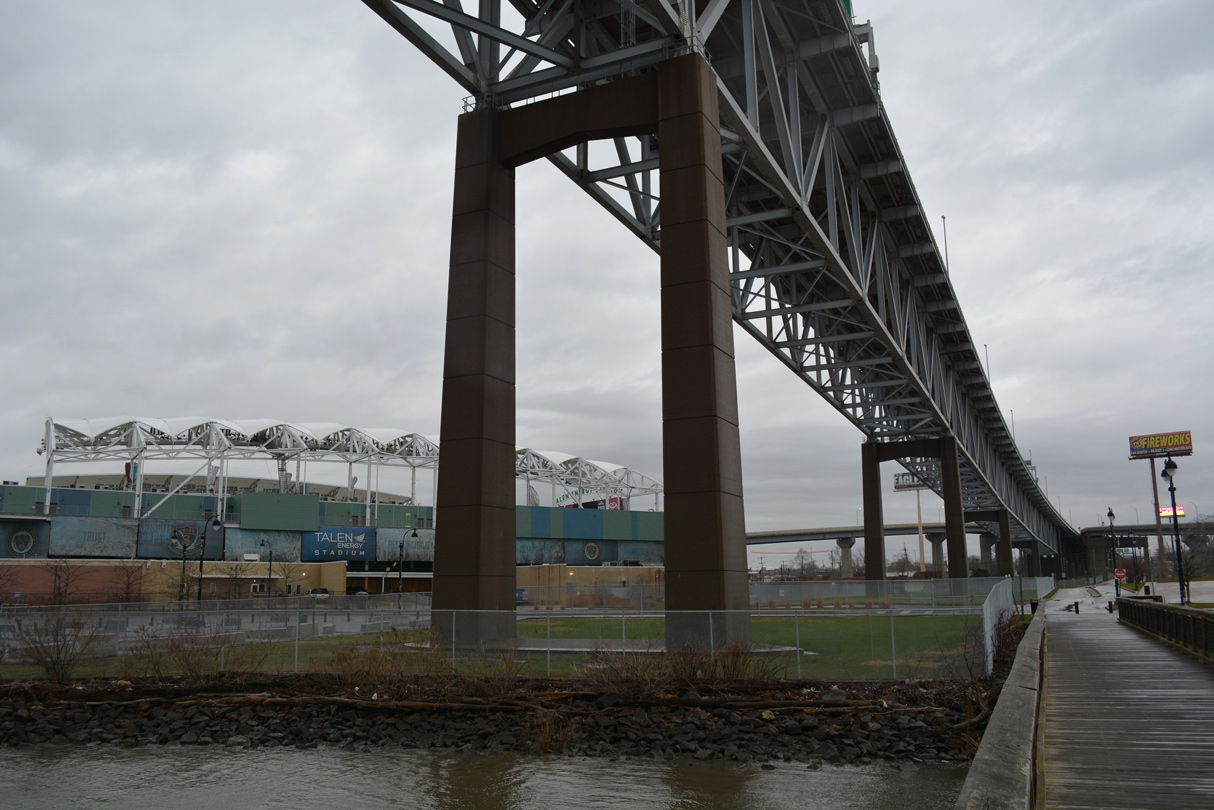 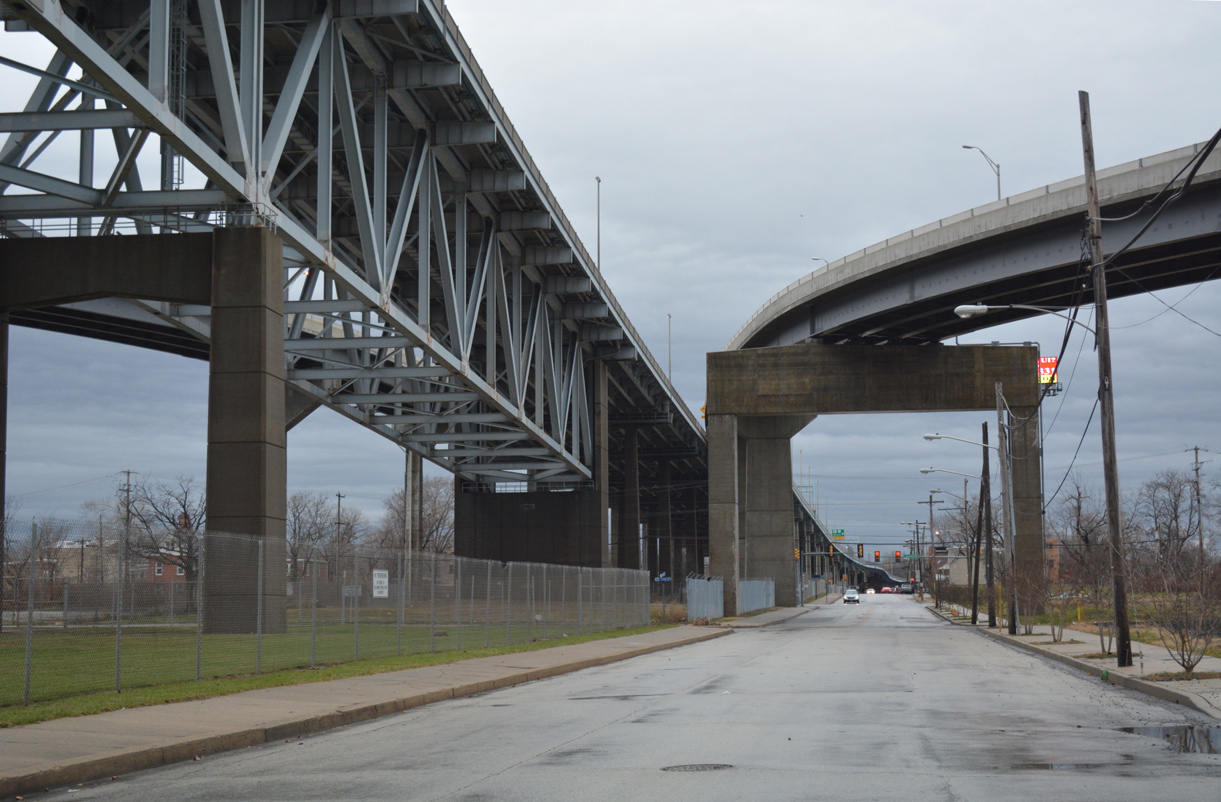 The Commodore Barry Bridge crosses the Delaware River south by Suburu Park (home of the MLS Philadelphia Union) and the Chester waterfront. 12/18/16

The Commodore Barry Bridge travels 192 feet above the Delaware River shipping channel. Costing $126.7 million to build,1 the span opened to traffic initially with no direct connection to Interstate 95. Traffic descended from the bridge to the Chester city street grid at Flower Street and U.S. 13 (Ninth Street) as local opposition delayed the completion of the link with I-95 for two years until October 1976.2