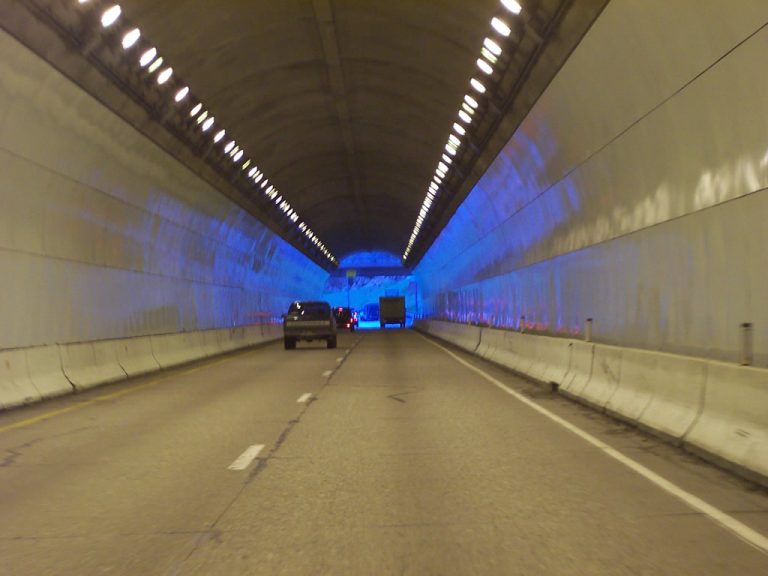 Interstate 70 passes through several tunnels as it crosses the Rocky Mountains, including the No Name Tunnel pictured here along westbound in Glenwood Canyon. Photo by Tim Kubat (2007).

Spanning the Centennial State, Interstate 70 travels 450 miles from the desert in Grand Valley to Burlington on the High Plains. Entering the state from Utah near Grand Junction, Interstate 70 follows the U.S. 6-50 corridor along the Colorado River. East from Grand Junction, I-70 leads to Rifle, Silt and Glenwood Springs. I-70 then travels through Glenwood Canyon, one of the last sections of Interstate highway completed in the state of Colorado. Considered to be a marvel of engineering, the four lane freeway was constructed through the tight canyon on a series of viaducts and through three tunnels. 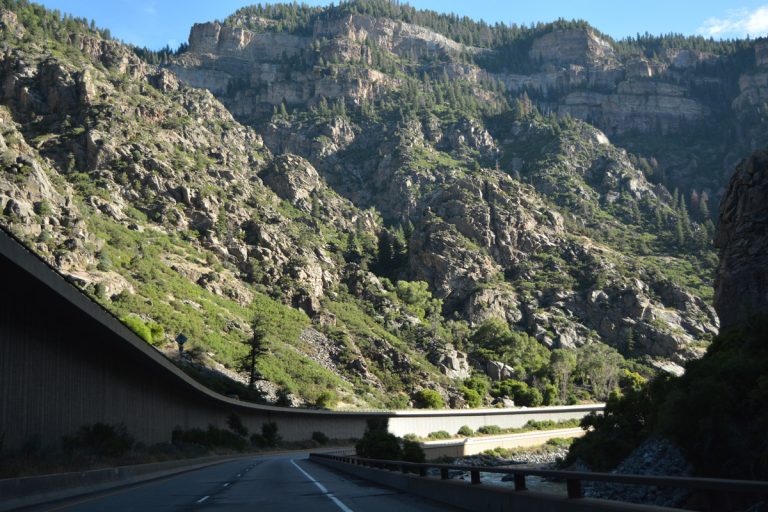 Winding through scenic Glenwood Canyon along Interstate 70 east ahead of No Name Lake. 08/11/16

Interstate 70 then enters the Rocky Mountains, connecting to several major ski resorts along the way: Aspen, Beaver Creek, Vail, Copper Mountain, Breckenridge, Arapahoe and Keystone. Many of these resorts are very close to the freeway, while others are located some distance from the freeway. Aspen, for instance, requires a trip along SH 82. However, one can ski Vail and look down on Interstate 70.

But Interstate 70 is not just for skiers. It is also for those who want to see the Rocky Mountains at their best. With the combination of National Forest, 14,000 foot high peaks, snow, highway tunnels and spectacular views, I-70 is easier to describe with pictures than with words. 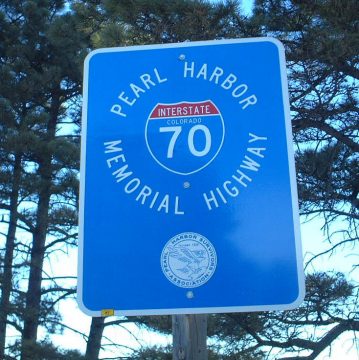 Interstate 70 is the Pearl Harbor Memorial Highway in Colorado. 02/02/02

The six lane freeway alomg Interstate 70 through northern Denver is part of what used to be the SH 72 expressway. The expressway was built in the mid-1960s between Sheridan Boulevard (SH 95) to the west, and Colfax Avenue (Business Loop I-70 and U.S. 40-287) to the east. While several portions of old construction for SH 72 were superseded by a variety of reconstruction projects, parts of the original freeway remained, including the 46th Avenue Viaduct, and portions near the east end of Interstate 270. The Central 70 Project rebuilds ten miles of the freeway leading east from I-25 (Mousetrap Interchange) to Tower Road in the Gateway area. The $1.2 billion project runs from 2018 to 2023. 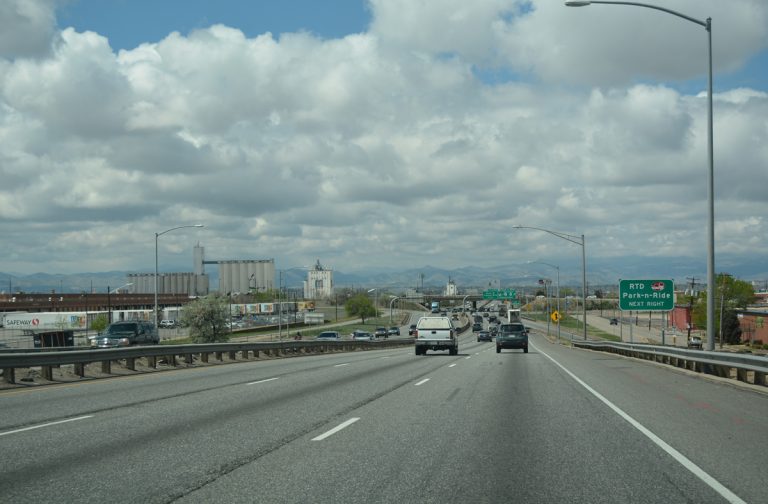 Advancing to SH 2 (Colorado Boulevard) on Interstate 70 west through the Northeast Park Hill area of Denver. The freeway elevated onto the 46th Street Expressway just west of Colorado Boulevard. 04/23/17

Originally, Interstate 70 in Colorado was planned to end in Denver from the east. This was due to the lack of interest in neighboring Utah for a connecting route along what was then U.S. 6-50. Officials from Colorado and Utah negotiated the concept of creating such a route, despite the enormous costs to construct the route through the mountains in both states. In October 1956, the federal government approved such a route, which would connect I-25 with Interstate 15 near Cove Fort, Utah. Plans never called for any further extension of I-70 west, although some have offered fanciful proposals.

Between 1956 and 1992, Interstate 70 in Colorado was under construction. The very first segment was constructed in Denver, along the route of 46th Avenue in the northeastern part of the city. Construction started in 1961 and this section opened on September 12, 1964. The first segment of I-70 to be completed west of the Continental Divide was between Clifton and the interchange with SH 65 in 1963. The final section to be completed and opened to traffic was in Glenwood Canyon. Officials descended on the canyon to dedicate this link in October 1992. 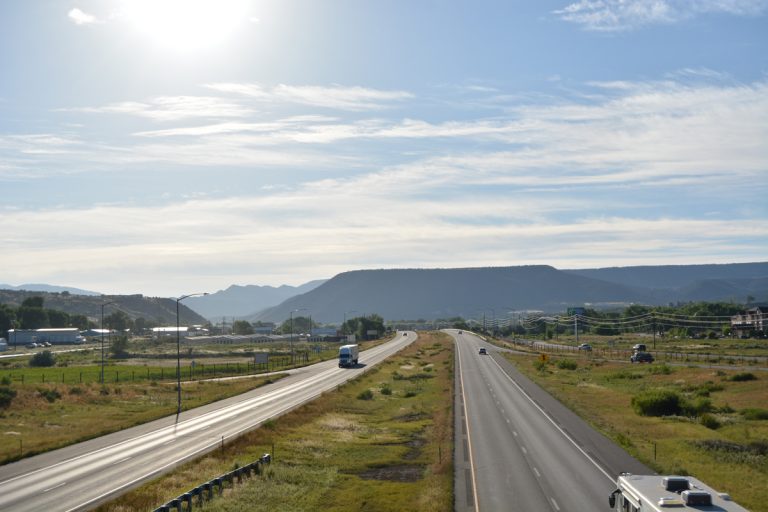 Interstate 70 heads east from Silt toward a mesa and Grand Hogback ridge. This stretch of freeway east to New Castle was completed in 1973. 08/11/16

While construction continued on Interstate 70, incomplete segments used portions of old U.S. 6 in. The freeway was initially constructed with two-way traffic on just two lanes with interchanges in some cases. Examples of this included the section between Agate and the West Limon Bypass (completed with two lanes in 1963, and widened to four lanes in 1968) and the section between Seibert and Bethune (two lanes opened in 1966, four lane freeway completed in 1971).

Many superlative achievements occurred on Interstate 70 in Colorado. The freeway was an engineering marvel as it weaved through and around mountains, and it was perhaps the most famous for its Continental Divide tunnel. Originally planned as the Straight Creek Tunnel, the Eisenhower - Johnson Memorial Tunnel is the formal name for the two tunnels that burrow under Loveland Pass. The original tunnel was the Eisenhower Tunnel, which is the westbound lanes of Interstate 70. Construction of this tunnel began in 1968; it was completed and opened to traffic on March 8, 1973. The second tunnel bore is the Edwin C. Johnson Tunnel. It was constructed between 1972 and 1980. Tunnels were constructed in several other locations along Interstate 70, including Beavertail (near De Beque), Glenwood Canyon and Idaho Springs. Also a three mile section of Tenmile Creek west of Frisco had to be channeled onto a new stream bed.

According to Colorado Department of Transportation 50th Anniversary of the Interstate Highway System web page, the completion of the Glenwood Canyon segment marked the final link in the mainline Interstate Highway System (excluding spur, bypass, and other three-digit Interstates). The Glenwood Canyon section of Interstate 70 provides plenty of recreation opportunities, including a bikepath for the entire length and four CDOT rest areas. The section of I-70 over Vail Pass also features a bike path. 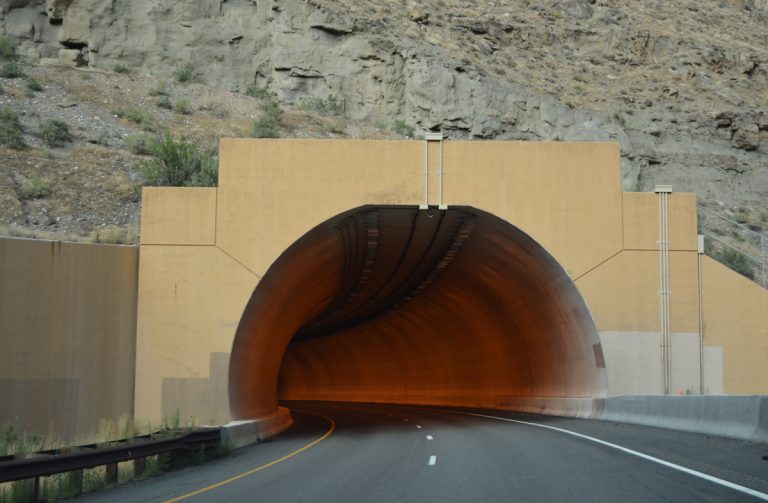 Dates on which each section of Interstate 70 was opened, from the Utah State Line to the Kansas State Line: