U.S. 90 primarily serves local traffic throughout the majority of its course in Florida due to the close proximity to Interstate 10. The route overtook the Old Spanish Trail when it was designated, with portions of U.S. 90 today retaining the name or closely paralleling the old roadway.

Despite the shift of through traffic to Interstate 10, many sections of U.S. 90 carry four overall lanes in Florida, both as commuter routes or as the main highway between cities and towns. The stretch between north Pensacola and Milton carries four lanes and is heavily developed to serve bedroom communities for Pensacola and Whiting Field Naval Air Station. U.S. 90 leading east from Tallahassee along Mahan Drive is similar in design, serving growing suburban areas. Within Jacksonville, U.S. 90 gains importance as a through route along Beach Boulevard between Downtown and Jacksonville Beach.

U.S. 90 (Beach Boulevard) was expanded and improved with medians, between St. Johns Bluff Road and Florida Community College at Huffman Road in Jacksonville, as part of a $2.6 million project starting in Summer 1996.1 Further east, an overpass was added for Kernan Boulevard above U.S. 90. Construction ran simultaneously with the $28.6 million expansion of Kernan Boulevard south from SR 10 to Glen Kernan Parkway. Costing $43.1 million, the urban diamond interchange opened to traffic at the end of March 2009.2 Widening of Beach Boulevard east from Hodges Boulevard to San Pablo Boulevard followed through early 2012.3 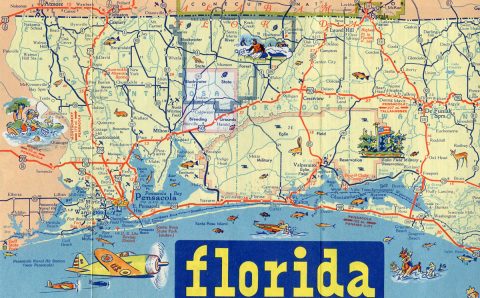 This 1948 map shows that a second U.S. 90 Alternate may have been signed along Scenic Highway between Pensacola and the Ferry Pass area as a temporary designation, with the U.S. 90 mainline taking Davis Highway (SR 291).